According to the online reference guide TheQualipedia.com, the company that produces basketballs for the NCAA Men’s Basketball Tournament tests them with a “Slam Machine” that takes five minutes to simulate the workout a ball will get in four games.

If only we all worked as hard as the basketballs this month.

Wagering on the 68-team NCAA tournament, popularly known as “March Madness,” is an annual ritual in the United States. Any individual can do it, with major sports websites like ESPN, Yahoo!, CBSSports, Fox, NBC offering the chance to fill out a bracket online for fun. President Obama has made a habit of filling out his bracket on ESPN each year, and who doesn’t want a chance to outsmart the leader of the free world?

Individual online contests are perfect for the hardcore sports fan, while inter-office pools are for everyone. The office contest is simple: One employee prints out a blank bracket and distributes it for co-workers to fill out. No basketball knowledge is necessary and often the employee who picks a winner because it has the goofiest name (Gonzaga, anyone?) winds up winning the office pool.

This is all in good fun — until it becomes a major distraction. According to a report on SmartMoney.com, work hours lost to filling out brackets cost U.S. employers more than $192 million in March 2012. The human resources firm Ceridian estimated the amount as high as $4 billion. Bloomberg.com reported that an estimated $12 million was wagered on the 2011 tournament.

The extent of tournament pools, and the amount of money at stake, gained national attention in 2003 when University of Washington football coach Rick Neuheisel was fired for his part in an office pool. He reportedly won $12,000, an excellent haul in any office. Unfortunately for Neuheisel, the NCAA prohibits coaches to wager on games in another NCAA sport (as well as their own). Neuheisel garnered public sympathy for losing his job over something many of us do every March. The fact that his teams were usually mediocre is also illuminating: How much better would the Washington football team have been if Neuheisel were coaching instead of gambling?

Before you consider participating in your office pool or filling out a bracket online, just remember: Everything in moderation. Spending more time researching each team in the tournament is more likely to lead to frustration than success. That’s especially true this year, with experts calling the 2013 field the most balanced of any in recent memory. Don’t be peer pressured into wasting your time if you don’t want to play. If you do, here are ten simple tips to making the most of your NCAA Tournament bracket:

There are more methods for filling out a bracket than there are teams in the tournament (68). When presented with two conflicting pieces of advice, go with your gut and move on to the next pick. 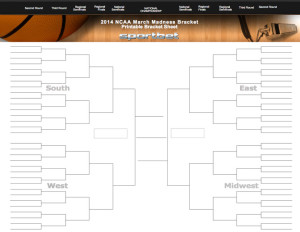 The first thing to do upon receiving your bracket is advance all four number-one seeds into the second round. No number one seed has ever lost in the first round of the tournament.

3. Find a single method and stick to it.

4. … Fill out more than one bracket, even if you only wager with one.

This way you can try multiple methods to see what works. For example, have one “favorite mascots” bracket, one “teams with historical success” bracket, one “west coast teams” bracket.

5. Don’t feel like you have to watch every game.

An easy way to lose your hair is to stay glued to the television with your bracket(s) in hand throughout the tournament. Many games won’t be decided until the last second, so at least during the two first rounds, check the scores at the end of the day if you’re particularly invested in your picks.

6. Don’t pick a team seeded eighth or lower to win the tournament.

It’s only happened once, in 1985, when eighth-seeded Villanova won it all.

7. Don’t leave last year’s champion in your bracket for too long.

The key to winning any NCAA Tournament pool is not to have success early in the tournament, but to pick teams that last until the end. One or two teams can win it for you, even if your first two rounds seem to go horribly wrong.

The 2012 Presidential Bracket was better than 96 percent of all those filed on ESPN.com. He did go to Harvard, after all

Dawn Bryan is an authority on quality, protocol, and conscious choice, Dawn Bryan has taught cultural competence to globalizing American businesses as well as to foreign diplomats and journalists. She has coached everyone from the executive staffs and personal assistants of financial institutions to airline CEO’s and legendary music moguls/rap artists. Her impressive career includes being selected as a spokesperson/consultant on international protocol and gift giving for many luxury brands, including Neiman Marcus, Hammacher Schlemmer, American Express, Swarovski Crystal, Citicorps/Diners Club, and Waterford Wedgewood. Dawn is the author of the best-selling THE ART AND ETIQUETTE OF GIFT GIVING (Bantam Books) and has authored many articles and columns on the subjects of gift giving, etiquette, and the quality of things for Business Week, Vogue, Town & Country, as well as bride, business and travel magazines, among others. She has won the Ellis Island Medal of Honor and a Lifetime Achievement Award from the National Association of People Living with HIV/AIDS for her extensive work with the cause.