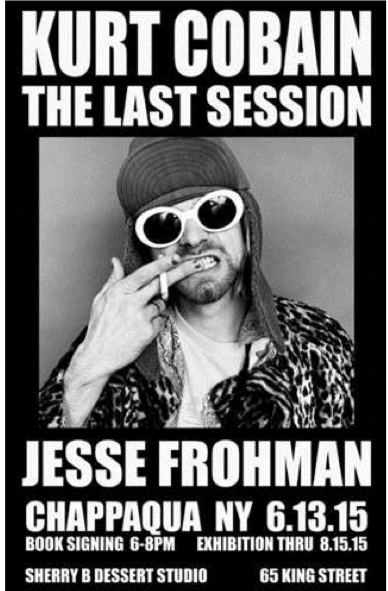 This Saturday, June 13, from 6:00 pm – 8:00 pm Chappaqua’s sherry b dessert studio will be hosting  an exclusive book signing for internationally known photographer Jesse Frohman and his latest book, Kurt Cobain: The Last Session on Saturday, June 13 from 6- 8p.

Kurt Cobain: The Last Session showcases a diverse range of 90 unpublished shots of Cobain, and provides a touching tribute to him twenty years after his tragic demise. Frohman attended Nirvana’s concert at the Roseland Ballroom in 1993 to take these photographs, which was the last formal photoshoot before Cobain passed in 1994. Vogue Magazine noted the book has “some of the most enduring images ever taken of the rock star. All the hallmarks of grunge and Kurt’s particular sensibility are there: his Jackie O sunglasses, the chipped paint on his fingernails, the patched jeans, and, most of all, Cobain’s iconoclastic vulnerability.”

Personally signed books by Frohman will be available for purchase for $50.