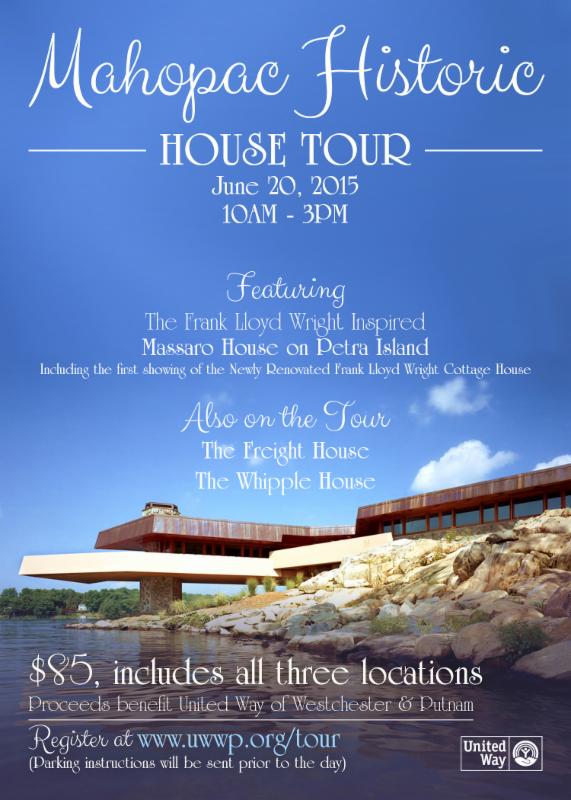 On June 20  United Way of Westchester & Putnam is hosting The Mahopac Historic House Tour, featuring Frank Lloyd Wright Inspired house on Petra Island. This is the first time these homes will be open to the public.

Massaro House is often compared to the elegance of Wright’s Fallingwater house. Wright created the architectural plans not merely to accommodate the topography around the house, but to incorporate the natural lay of the island into the design. The cottage house was built under Wright’s direction but the main house Wright designed for Petra Island was not built until after his death. This is the first showing of the newly renovated cottage house!

Choose a tour time when you register: 10am, 11am, 12pm and 1pm.
Boat Transportation included – courtesy of Mahopac Marine Melchner Family

Built in 1872 as a storage facility for the New York Central Railroad, this site was used to package cargo to ship south to NY City. Blocks of ice were cut from Mahopac Lake in the winter and stored in sawdust at the Freight House for shipments year-round. The site has been newly restored and renovated for use as a café and historic site.

The house was built circa 1900. It has been meticulously restored as originally built replete with horsehair plaster. The home is filled with artifacts reflecting the Whipple family’s four centuries in America. The home also contains an extensive collection of material relating to Putnam County’s history.

Tours including garden croquet and light refreshments are offered starting at 10am.

$85 for all three locations