AT EMPIRE CITY CASINO ON SATURDAY, AUGUST 5th IN SUPPORT OF ALS RESEARCH

PUBLIC INVITED AND ENCOURAGED TO JOIN THE CAUSE 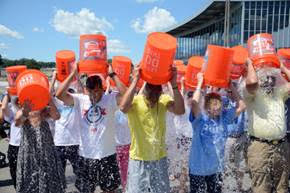 The reason: to support Quinn, one of the co-founders of the global phenomena Ice Bucket Challenge, and reignite the social media movement to once again go viral throughout the month of August to benefit ALS research.

Empire City Casino is donating the entire set-up and staffing, as well as nearly 1,300 pounds of ice for all of the participants’ buckets, and will also provide entertainment, face painting, balloon artists, and giveaways to the first 500 attendees.  The public is encouraged to pre-register online atYonkersNY.gov.

“We are excited and proud to be involved in such an important effort,” saidTim Rooney, president and CEO of Empire City Casino at Yonkers Raceway.  “ALS is a devastating illness, and continuing to raise awareness and research funds is vital.”

“Pat Quinn’s fight and determination to combat this horrible disease has been nothing short of inspirational,” said Mayor Spano.  “With Pat as our fearless leader, the City of Yonkers hopes to recharge the energy we feel as part of the Ice Bucket Challenge.  We encourage any and all to join us on August 5th so we can continue to make strides in finding a cure to ALS.”

Amyotrophic lateral sclerosis (ALS), often referred to as “Lou Gehrig’s Disease,” is a progressive neurodegenerative disease that affects nerve cells in the brain and the spinal cord.  ALS, a disease with no known cure, usually strikes people between the ages of 40 and 70.  Approximately 20,000 Americans currently suffer from the disease.  Pat Quinn, 34-years-old, was diagnosed with ALS in March 2013.

“Yonkers is proud to once again host the ALS Ice Bucket Challenge,” saidCouncil President McLaughlin.  “Pat Quinn, the Quinn family and our friends at Empire City and Home Depot have done so much to make this event a success which will set the bar for raising awareness about ALS nationwide.  Pat has courageously and selflessly turned his battle with ALS into one of the largest movements this world has ever seen.  We are proud to join him in that effort.”

“I’m beyond grateful for the continued support from Mayor Mike Spano, City Council President Liam McLaughlin, and the entire City of Yonkers.  I’m extremely proud to know Quinn for the Win and Yonkers continue to fight ALS together.  We live by the mantra, ‘Every August Until A Cure.’  There is greater hope within the ALS community now than ever before because of the Ice Bucket Challenge, but we can’t stop now.  We still have no cure for ALS.  Please join me August 5th at Empire City Casino to kick-off the ALS Ice Bucket Challenge in Yonkers.  Not only will it be fun, you will be a part of something special,” said Pat Quinn.

Proceeds from the event will be donated to Quinn for the Win which benefits Pat Quinn’s care as well as not-for-profit ALS research organizations.  For more information, go to YonkersNY.gov,Quinn4theWin.com, and www.Facebook.com/QuinnForTheWin.