In 1968, Bill Cunningham embarked on an ambitious eight-year project: He collected over 500 vintage outfits and photographed them on models in more than 1,800 historic New York City locations.  The resulting series — entitled “Facades.”

This exhibition is organized by The New-York Historical Society. 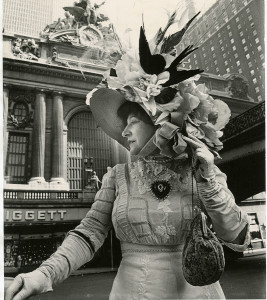 The Esther B. O’Keeffe Gallery is open Monday through Saturday 10 a.m. to 5 p.m. and Sunday 1 to 5 p.m. Gallery admission is $5; no charge for Four Arts members and children 14 and younger. Exhibition catalogs will be available for purchase at the gallery reception desk.

More than 80 original and enlarged images from Cunningham’s whimsical and bold work will be on display to offer a unique perspective on both the city’s distant past and the larger cultural zeitgeist in late 1960s-70s New York City   ̶ an era when historic preservation and urban issues loomed large.

Over eight years, Bill Cunningham collected more than 500 outfits and photographed more than 1,800 locations for the “Facades” project, jotting down historical commentary on the versos of each print. The selection of 80 images on view will evoke the exuberance of Cunningham and Sherman’s treasure hunt and their pride for the city they called home. Cunningham’s images will be contextualized with reproductions of original architectural drawings from The New-York Historical Society’s collection.

During the years that Cunningham worked on “Facades,” New York City was in a municipal financial crisis that wreaked havoc on daily existence, with crime, drugs, and garbage seemingly taking over the city. However, the 1970s were also an era of immense creativity, when artists and musicians experimented with new forms of expression. While Cunningham’s photographs offer an unsullied version of the tough cityscape during this chaotic time, his vision was part of a larger movement towards preserving the historic heritage and improving the quality of urban life.

Most images in “Facades” feel timeless, such as “Gothic Bridge” (designed 1860), featuring Editta Sherman strolling through a windswept Central Park, framed by the wrought-iron curves of a classic bridge. However, at least one will offer a peek behind the scenes of the project. Cunningham and Sherman often traveled to locations by public transportation to avoid wrinkling the costumes, and “Editta Sherman on the Train to the Brooklyn Botanical Garden” (ca. 1972) captures the jarring juxtaposition of Sherman sitting primly in a graffiti-covered subway car.

Bill Cunningham (born 1929) is a fashion photographer for the New York Times, known for his candid street photography. Cunningham moved to New York in 1948, initially working in advertising and soon striking out on his own to make hats under the name “William J.” After serving a tour in the U.S. Army, he returned to New York and began writing for the Chicago Tribune. While working at the Tribune and Women’s Wear Daily, he began taking photographs of fashion on the streets of New York. The Times first published a group of his impromptu pictures in December 1978, which soon became a regular series. In 2008 Cunningham was awarded the title chevalier dans l’ordre des Arts et des Lettres by the French Ministry of Culture. He is the subject of the award-winning documentary film “Bill Cunningham New York” (2010). Bill Cunningham and Editta Sherman were neighbors in the Carnegie Hall Studios, a legendary artists’ residence atop the concert hall, for 60 years.