I have been posting the highlights of my social distancing walks.  Much to my surprise and delight the comments have been many.  I was told that the clock was built for the owner of Macy’s daughter to remind her of New York City. When I posted this photo, the comments got me thinking that I need a refresher on the history of The Sutton Clock Tower. With a little help form google this is what I found.

At the comer of Guard Hill and Succabone Roads stands a tall, handsome brick tower which is a landmark and a source of joy and some amusement to the townspeople. This is the famous Sutton Clock Tower, and this is the story behind it.

In the late 1880s when the Sutton family moved to their country home in Bedford, Mrs. Sutton was homesick for New York City. Among other things, she missed the sound of the city’s church bells. Thereupon Mr. Sutton installed in his barn a huge clock, an E. Howard time and strike model with a 550-pound bell.

After Mrs. Sutton’s death, the property was sold. The barn was dismantled but the clock and bell were rescued and in 1939 a group of neighbors raised $3000 to build a tower to house the clock. They then donated the tower to the Town of Bedford. Since 1985, the Historical Society has leased the tower and maintains the clock. A small group of neighbors, known as the Clock Winders, takes turns winding the clock, which is accurate to this day as the chimes ring the hours across the surrounding fields and meadows. 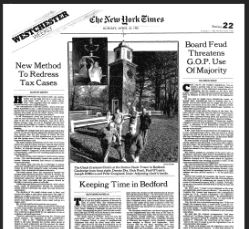 Dennis Dix of Bedford will climb the ladder to the 19th-century clockworks in the Sutton Clock Tower. Holding a flashlight, he will pull a pin on a dial, disengaging the gears, and with one revolution of the dial, he will move the hands on the wooden clockfaces forward the requisite one hour.

”It’s much easier in October, when we turn the clock back,” said Mr. Dix, the coordinator of the Clock Crankers Clutch, a group of neighborhood volunteers who wind the tower clock each week. ”Then I just drive by and stop the pendulum for an hour.” The bob on the pendulum is conveniently located on the ground floor of the 35-foot brick tower.

Despite appearances, time does not stand still in this rural section of Bedford where dusty dirt roads wind past horse farms, Victorian mansions, mock-Tudor and Georgian manor houses, pre-Revolutionary War farmhouses, hilltop estates and gingerbread gatehouses. This pendulum clock that chimes each hour seems out of place at the intersection of Guard Hill and Succabone Road – two dirt lanes within earshot of the roaring traffic on Route 684. But the clock and chime have been a Bedford tradition for more than a hundred years, since James Sutton installed them in the cupola of his barn to please a wife who was homesick for the sounds of New York City. In 1939, the clock was moved to its present home in the Clock Tower.

The timepiece would have run down long ago without the neighborhood men who took on the task of winding the clock each week. The current clock winders include Joseph DiMicco, cranking his way through January and July; Peter Coupland, winding in February and August; Larry Kennedy, hoisting those weights in March and September; Dick O’Leary and his son Paul, winching their way through April and October; Dick Pearl, reeling through May and November, and Jack Burke, circumrotating in July and December. Then the cycle begins again.

‘It gives a good feeling to be a winder, because every time you pass the clock tower, you say to yourself ‘I help to make it work.’ It’s not a chore at all,” Dick Pearl said.

Each Christmas, an anonymous neighbor hangs a wreath on the door of the tower. Phyllis Dix has planted daffodils around it, and one Halloween two young brothers guarded it against vandalism.

Stories about the clock abound. The Mr. Sutton who installed the clock was the son of a Bedford farmer. Depending on the story, he either amassed his fortune and married Florence Macy, the only daughter of R. H. Macy, or married her and then amassed a fortune.

In any event, by the late 1800’s Mr. Sutton had added enough land to the family farm for the property to be known as the ”Sutton Empire.” In 1879 he built his bride a Victorian mansion known as the Sutton Place.

”I was brought up on the story that Mr. Sutton was a difficult man and when he was building the house the French architect nearly went out of his mind because Mr. Sutton was so demanding,” said Wilhelmine Waller of Bedford, the granddaughter of Thomas E. Kirby, who bought his land from Mr. Sutton at the turn of the century. ”The architect got so annoyed that he said, ‘I’ll finish this job and fix it so they’ll never have a happy moment in the house.’ So the morning the Suttons were to see the house, the architect hung himself from the skylight, thinking that this would finish everybody. But Mr. Sutton had him cut down and very happily moved in. Of course, I can’t guarantee the veracity of the story, but I grew up with it.”

According to another story, Mr. Sutton took his bride out to the red-and-green Victorian mansion in 1879 when there were cows, crickets and little else in Bedford. Mr. Dix related: ”The story is told that she was frightfully homesick for New York City. He came in one day and found her in tears. Asked what she missed most, she thought for a while and said it was the sound of the Grace Church bells.” So Mr. Sutton had a clock with a chime that matched the sound of the bells of that Lower Manhattan church installed in the cupola of his barn.

Later a fire destroyed the barn and the clock was moved, finally, in 1939 to a specially built tower nearby. ”Everyone in the community lived on that clock,” Mrs. Waller said. ”We went to bed by it, we cooked our meals by it. We did everything by it. It was almost like the Angelus in the Catholic countries. So the people in the community raised a kitty to put the clock in the clock tower in which it now stands.” Mrs. Waller attended the dedication ceremonies in 1939, when the clock tower and land surrounding it were turned over to the town of Bedford.

Until World War II the clock was wound each week by the Bedford police patrol. After the war the task of cranking it up was taken on by Craig Whitney, who lived nearby and who enlisted others to help him – until he moved in 1978. Then Mr. Dix, a clock winder, became the coordinator. Each December he holds a party for the winders.

During the 1950’s one Bedford resident couldn’t stand the sound of the chime and requested that the bell be silenced. He moved away, and the clock remained.