Alcohol addiction has become rampant to many parents, and its effects are affecting even the kids. While most people take alcohol for leisure, others indulge in it because of stress that gets caused by hardships. Most people end up finding solace in alcohol after being rejected or losing their loved ones. If you think this applies to your problem try this specialized addiction treatment.  Addiction in parents significantly affects their kids, mostly psychologically. When not controlled, kids end up suffering and finding alternatives after seeing their parents wasting away.

Here are some ways in which a parent’s addiction affects their children.

1. There is no Home Normalcy

Alcohol addicted parents are never at home. Some are always out drinking, leaving their children to fend of themselves. A home without parents isn’t typical, and it’s the kids who suffer. When kids see their parents struggling with alcoholism, they tend to worry about who will take care of them and their role models. Children end up guessing what’s expected and whatnot, depending on their parents’ behaviors that get drenched in the drink. If you are an addicted parent and reading this, it’s high time you rescue your kids by seeking rehabilitation to stop alcoholism. You can seek local centers or choose alternatives to local centers for rehabilitation. By going to rehab, you will get help on how to recover from this addiction and be well again to raise your kids in a required way. Get help before your problem gets worse.

Parents should protect their children from anything, including outside forces and life threats. But what happens if the parents are addicted to alcohol and can’t stand for their children? That’s where trust issues come by. Your children will be subject to an environment full of lying, denial, keeping secrets, and other habits, making them have trust issues even in their future lives. Having broken promises in their minds will make them never trust anyone in the future. When these children suffer from trust issues, they may isolate themselves from their peers and even avoid relationships when they grow up since they grew with such fears in their minds. Such children will always avoid conflicts and confrontations, which they fear might arise to violence.

Some children raised by alcoholics end up judging themselves harshly when they grow up. They always try to find a break from such vice but in vain, thus making them have low esteem and regarding themselves as not worth it. They tend to think that they had the worst bringing and that they aren’t fit to be compared to other people, thus isolating themselves. You can even find them sitting alone in schools and other areas, thinking they aren’t good enough to be with other people. From this judgment, they find it very difficult to make friends or be in any social group. Most children born out of these families end up becoming introverts.

4. Kids Seek Approval from Others

There is nothing as wrong as when someone can’t trust themselves or their instincts. When children are raised through confrontations and being judged harshly by alcoholic parents, they end up growing knowing they can’t do anything right in their lives. They end up pleasing people to be considered right and can’t do anything without seeking others’ approval. Such children end up becoming workaholics (see how it differs from working longer hours) or perfectionists, trying to seek consent just like the way they were raised harshly by their alcohol-addicted parents. If raised by deficient or absent parents, such children end up sticking into toxic relationships and have a fear of abandonment, since they don’t want to be alone the way they grew up.

5. Early Indulgence to Alcohol and Drugs

When parents get addicted and start coming with alcohol to their homes, children may begin taking such stuff. Most children who get into drinking learn this vice from their parents. And without even knowing the effects of the alcohol in their body. One of these is having an Asian flush. This is when your face turns to red. Asian flush or glow, the more scientific term is alcohol flush reaction. When these people drink alcohol, the toxins accumulate and end up causing the reaction known as Asian flush. But thanks to Get Sunset as they have this supplement that is specifically designed for this condition and to support the body when dealing with this condition. To fully stop this condition though, you’ll have to stop drinking alcohol completely – or at the very least choose drinks that have lower alcohol content. 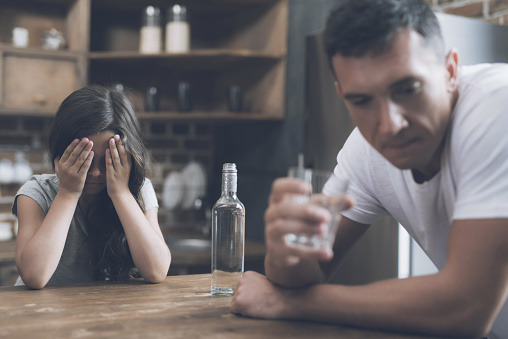 If it’s a must that you should drink, do it away from the kids. If you feel that you are addicted, you can go to rehabs to save your family from being addicted to this act as it will get passed through generations. Alcohol addiction is not something one should be happy about. It’s like a disease and can lead to other complications, including depression, high blood pressure, and even death when not controlled in time. Get hold of your life now, seek rehabilitation, and get help to stop it.