Signup to Follow Stacy’s Blog!
Sunscreen Cover-up: Can too little sun cause cancer? 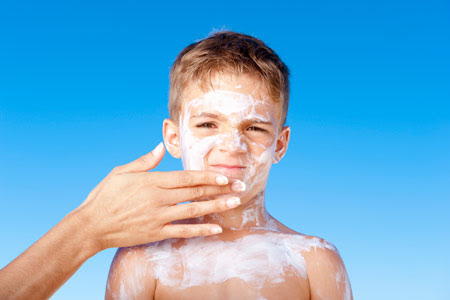 For decades now, our sun has been reviled and demonized.

The message from the medical community: Avoid direct exposure, or face an increased risk of skin cancer. As the American Cancer Society helpfully put it in one ad campaign: “Fry Now. Pay Later.”

The American Academy of Dermatology recommends never exposing bare skin to the sun, or even a cloudy sky, without sunscreen. The Food and Drug Administration calls ultraviolet radiation a carcinogen.

These messages have caused widespread paranoia about sunlight, especially among parents who religiously apply sun protection multiple times a day on their children. After TV chef Nigella Lawson was photographed covered head to ankle in a black “modesty” swimsuit at the beach, she explained that she didn’t want to get burned.

But while we need to avoid cancer, we also need vitamin D, and the sun is the only reliable way to get it outside of a daily supplement.

Australia’s decades-long public campaign to curb its skin cancer rates and encourage less sun exposure has been unfortunately effective: 31 percent of Australian adults are now vitamin D deficient, which is linked with a number of serious and deadly conditions, including several cancers.

Sunscreen dramatically limits the production of vitamin D – SPF 30 reduces it by 97 percent. Meanwhile, the risks associated with sensible sun exposure have been exaggerated by well-meaning health authorities, and the measures to guard against them often have nothing to do with the sun’s occasionally malignant effects.

Contrary to the paranoia generated by years of messaging, the sun is not our enemy. It’s safe to step back outside – and, please, go easy on the sunscreen.

A lack of vitamin D is associated with increased risk for Type 1 and 2 diabetes, multiple sclerosis, rheumatoid arthritis, Crohn’s disease, cardiovascular disease, stroke, depression, Alzheimer’s disease, schizophrenia, colon and breast cancer, influenza and tuberculosis. Vitamin D deficiency is more likely to occur at higher latitudes and in the winter, when the angle of the sun is more oblique; in the 1940s, doctors found that living at higher latitudes increased the risk of dying of cancer. Of the 30 leading causes of deaths in the United States in 2010, 19 were linked to low vitamin D status.

We simply aren’t getting enough vitamin D. The USDA’s 2015 Dietary Guidelines Advisory Committee placed the compound high on its list of under consumed nutrients; it also identified vitamin D deficiency as a public health threat.

Is too little sun just as bad as too much? if we get too much sun we risk skin cancer. Too little and our risk soars for other cancers.

According to researchers in the UK, the number of youngsters admitted to hospitals with Vitamin D deficiency has more than tripled in four years.

Daily Mail: The children in agony because their parents are scared of the sun

How do you strike a healthy balance? How much sunscreen is too much?