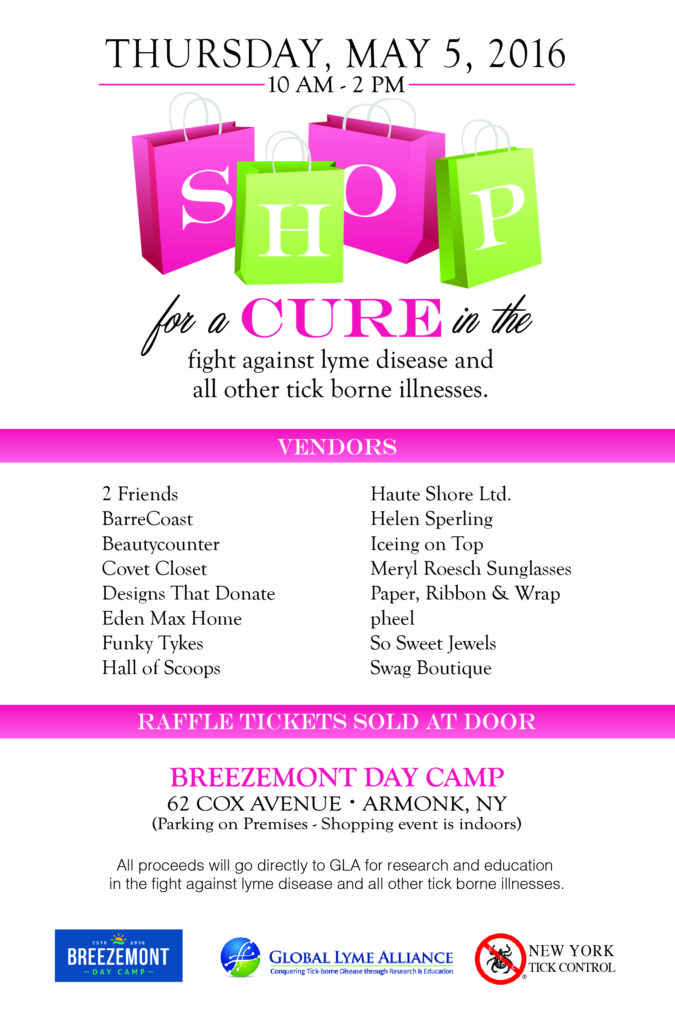 The Global Lyme Alliance (GLA), the nation’s leading tick-borne disease organization dedicated to supporting Lyme and tick-borne disease research and education, will be hosting its fourth annual Shop for a Cure event on Thursday, May 5, 2016 from 10:00 a.m. to 2:00 p.m. at Breezemont Day Camp in Armonk, NY. More than 15 women’s, children’s and home vendors will be participating in this year’s fundraiser and donating a portion of proceeds to GLA in support of its research and education initiatives. In addition to the merchandise that will be for sale, attendees can also take part in a raffle for a chance to win a variety of great prizes including gift certificates to local shops and restaurants.

“The Shop for a Cure event is a great way for everyone in the community to get involved and help us raise money for the cause,” said Alyssa Sokoloff, event organizer and GLA Board of Directors member. “While I have personally suffered from this terrible disease and the myriad of Lyme disease’s debilitating symptoms, it is the hope of preventing anyone else from facing what I have that drives me to raise awareness of Lyme and all tick-borne illnesses.”

The 2016 Shop for a Cure event vendors include:

More than 300,000 Americans are infected with Lyme disease each year, 10 times more than previously reported by the Centers for Disease Control and Prevention. As it often goes undetected, millions more are at risk of developing life-debilitating, potentially deadly conditions. The National Institutes of Health found that the impact of Lyme disease on people’s health was at least equal to the disability of patients with congestive heart failure, osteoarthritis and greater than those seen in type 2 diabetes.

GLA, formed by the merger of Lyme Research Alliance (LRA) and Tick-Borne Disease Alliance (TBDA), is a leading private nonprofit organization in the United States dedicated to finding a cure and accurate test for Lyme disease as well as educating physicians and the public about the dangers of Lyme. GLA has gained national prominence for its commitment to changing the course of Lyme disease by funding ground-breaking research, while expanding education programs for the general public and physicians. The 501(c)(3) nonprofit is headquartered in Greenwich, CT. For more information, go to GlobalLymeAlliance.org or call 203- 969-1333.