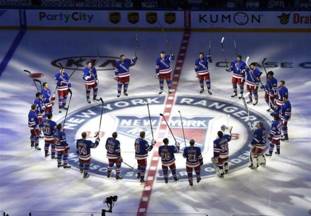 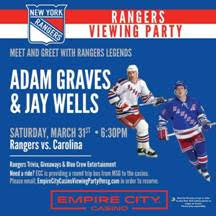 Empire City Casino, in partnership with the New York Rangers, announced today the next New YorkRangers viewing party on Saturday, March 31st, at 6:30 p.m., which will be hosted by former New York Rangers Legends Adam Graves and Jay Wells. Both Graves and Wells will mingle with fans, sign autographs and cheer the Rangers on as the team visits the Carolina Hurricanes. This is Graves’ second visit to Empire City Casino, having hosted a viewing party last year, with Wells making his first hosting appearance.

Graves and Wells were teammates on the New York Rangers 1994 Stanley Cup Championship Team, helping deliver the blue shirts their first cup in over 54 years. Also joining them for the festivities will be the Rangers Blue Crew, who will put fans to the test with Rangers trivia and offer an array of signed memorabilia and Rangers swag as giveaways during each intermission.

The viewing party will be held inside the Red Room on the second floor of Empire City Casino and is FREE to attend. The festivities begin 30 minutes before the puck drops. Hungry fans should stop by Dan Rooney’s prior to the viewing party to enjoy upscale pub food, including the renowned garlic chicken wings and classic Dan Rooney burger topped with brie cheese, watercress, and homemade honey peppercorn aioli. Beer & wine will also be available for purchase in the Red Room during the party and game.

Fans coming from NYC or New Jersey can also hop on a free Rangers shuttle bus, which departs Madison Square Garden (outside Café 31, 220 W. 31st St. between Seventh and Eighth Ave) at 5:15 p.m. on March 31st, arriving at the casino around 6:00 p.m.

The fun doesn’t stop when the game ends. Right next to the Red Room is Alley 810, an ultra-plush craft cocktail lounge with retro bowling lanes featuring the hottest DJs in the tristate. Dance the night away with New Jersey’s very own DJ Andy Rivera, mixing his own house music as well as remixes of today’s most popular songs.

Patrons and fans can also try their luck on Empire City Casino’s latest millionaire-making jackpot – the Wheel of Fortune® slot machine, which surpassed the $1-million mark earlier this month. New players should be sure to sign up for the free Empire Club membership at any Promotions Booth to earn perks, including free play and food offers, while hitting the slots. For more information about Empire City Casino, please visit www.empirecitycasino.com.