Gorilla River is proud to announce 12 artists whose videos will be featured at the Music Video Film Festival, running Saturday night, Feb 8 at the Chappaqua Performing Arts Center.  This brand new event is open to the public, and tickets are available at www.MusicVideoFilmFestival.com 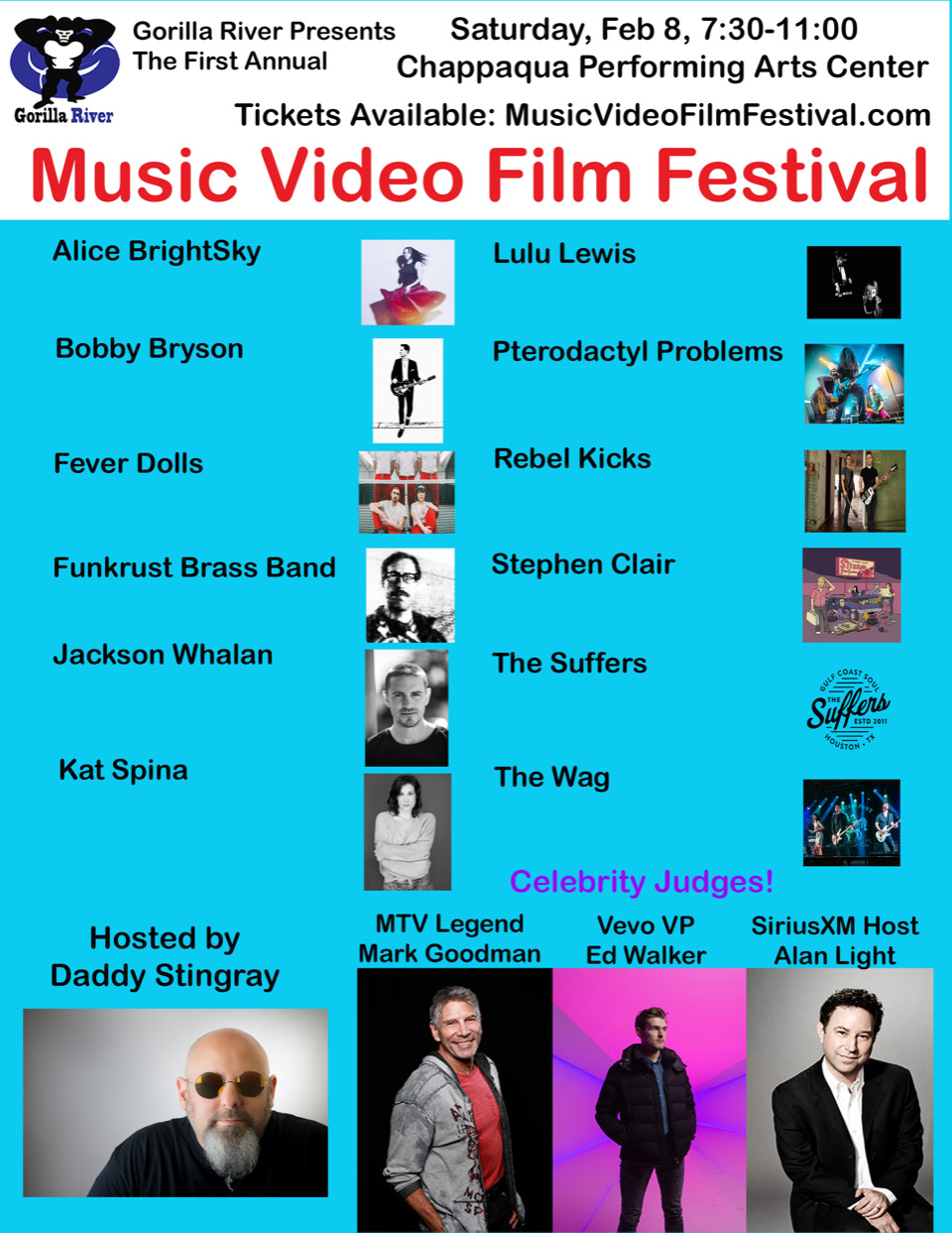 The audience will learn what went into the creation of each video through commentary from video director and band. They will also hear insightful feedback by a panel of celebrity judges who are deeply connected with the music video scene. And finally, they will enjoy all of the videos on a big screen surrounded by hundreds of enthusiastic music fans.

Featured videos include “Everybody Said” by The Wag, “Adeline” by Fever Dolls, “All Just Pretending” by Lulu Lewis, “Different Skies” by Bobby Bryson, “Everything Here” by The Suffers, What Got in Your Head” by Stephen Clair, “Lover’s Fate” by Alice Brightsky, “Parathesia” by Pterodactyl Problems, “Terminus” by Funkrust Brass Band, “Let it Out” by Rebel Kicks, “SNAG (Sensitive New Age Guy)” by Jackson Whalan, and “Sing” by Kat Spina. Nominations were accepted from across the country, including North Carolina, Toronto, and Houston.

“We were incredibly lucky to have so much talent interested in this event. I love being able to discover new music and am excited to share it this way,” said Gorilla River founder Dave Hoffman

Guests will be treated to feedback from an esteemed panel of judges including Sirius XM host Mark Goodman (One of MTV’s “First Five VJs”); Vevo VP of Original Content and Production Ed Walker; and Music Journalist Alan Light (author of Let’s Go Crazy: Prince and the Making of Purple Rain, and The Skills to Pay the Bills: The Story of the Beastie Boys) who will offer expert commentary based on their integral roles in the music video scene.  They will also select three winners who will get to present their videos at the 2020 Hudson Valley Music Summit in front of 200 artist managers, record labels, booking agents, publicists and artists.

The Music Video Film Festival is an extension of the Hudson Valley Music Summit which launched this summer in Kingston NY.  Local luminaries such as Pete Shapiro, owner of the Capital Theatre and Stefani Scamardo of Hard Head Management spoke at the 2019 event.

The Music Video Film Festival promises to tap into the same spirit of creative enthusiasm as it brings a new music and film event to rock and roll fans in the area.

Tickets are available at www.MusicVideoFilmFestival.com.