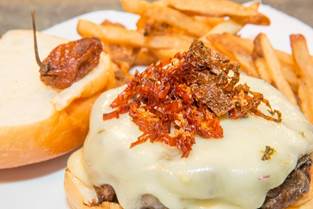 Juniper Bar, the newest upscale bar and restaurant to descend upon New York’s Midtown West, has introduced a new spicy burger that will leave the city’s most hard-core heat-seekers trembling and begging for mercy. Juniper’s Fire Breathing Burger isn’t for the faint hearted. Packed full with one of the world’s hottest peppers, the Ghost Pepper, along with Sriracha aioli and spicy pepper jack cheese, the Fire Breathing Burger may well be a new contender for the title of New York’s Spiciest Burger.

Ghost Peppers, otherwise known as Bhut Jolokia, clocks in at over one million on the Scoville Spiciness Scale. That’s an eye-popping 900.5 times hotter than Tabasco Sauce or 400 times hotter than a medium chili pepper. It’s so spicy it has become a something of a legend in chili pepper eating dares, with many popular YouTubers putting their stomachs, and their manliness, to the ultimate test.

Combine this with the Fire Breathing Burger’s double whammy of Sriracha Aioli and Pepper Jack Cheese, which includes spicy hot peppers for an extra kick, and you’ve got yourself a burger so spicy you’ll have watering eyes and a tingling nose even at the thought of eating it. Prepare to scare the pants off your taste buds.

If you’re a true chili head, Juniper Bar’s Fire Breathing Burger is not to be missed