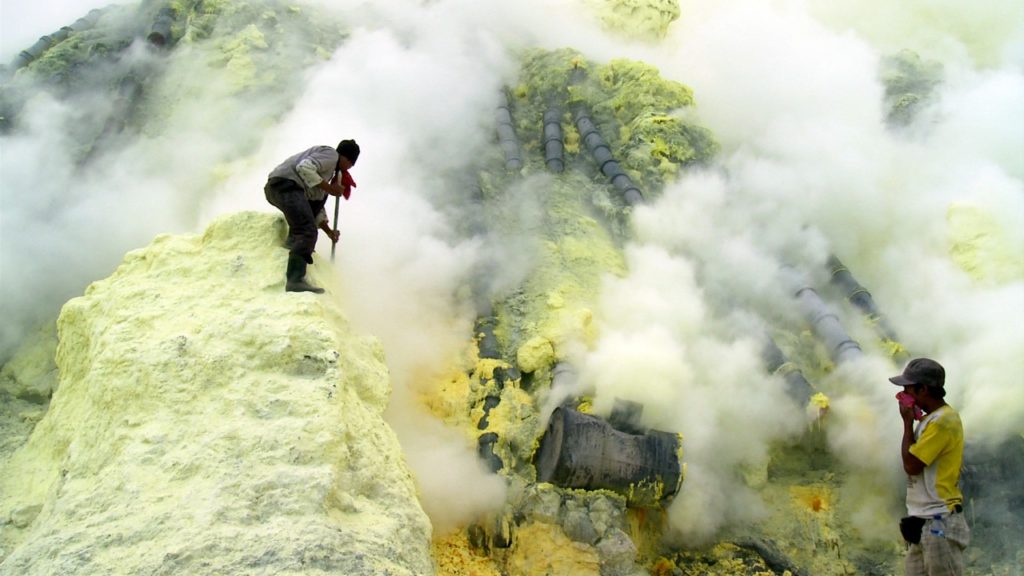 In her recent video installation, artist Janet Biggs documents sulfur workers as they extract minerals from inside Indonesia’s fiery Ijen volcano. With nothing but bandanas covering their mouths, the miners scale the exterior of the active volcano, then descend into its roiling interior to extract the sulfuric rocks and shards. The extraordinary video that results, A Step On the Sun, will be on view at the Neuberger Museum of Art from September 10 through December 22, 2017.

Janet Biggs is drawn to extreme environments, exploring such remote locations as the Taklamakan Desert in China, the Afar Triangle of Ethiopia, Eritrea, and Djibouti in Africa, and the Arctic. Her five-channel video installation, A Step On the Sun, centers on a crater situated almost two miles above sea level in East Java province, which houses the world’s largest sulfuric lake. Throughout her work Biggs assumes the role of a wanderer in search of unexplored territory, both physically and psychologically.

According to Helaine Posner, the museum’s chief curator, the imagery and the unfolding story are riveting. “We are immediately confronted by a provocative mix of intensely experienced natural beauty, danger, and exploitative labor,” she says. “We watch as a miner, surrounded by fumes and poisonous exhaust, collects hardened sulfur crystals and packs them into a basket. Then, amidst clouds of toxic sulfur dioxide gas, he carries his heavy load up a steep, rocky path from the crater floor to the rim, before he sets out for a distant weigh-station, a journey he makes several times a day.”

In an interview, Biggs said she uses landscapes in extreme environments as “surrogate characters to the individuals who struggle to maintain a sense of self. Existing within this incredible beauty is one of the most extreme examples of human exploitation and hardship I’ve ever witnessed. Nothing is mechanized. It is mineral extraction at its most primitive basic.”

The Neuberger Museum of Art opened on the campus of Purchase College, SUNY, in 1974 with a core collection donated by one of the greatest private collectors, philanthropists, and arts advocates of the twentieth century, Roy R. Neuberger. Today, the Neuberger is more active and vibrant than ever.  Critically acclaimed exhibitions and a wealth of educational tours, lectures, and interactive programs engage the many parts of our broad community.  The Neuberger is a center of teaching and learning for all stages of life.

The Museum is located at 735 Anderson Hill Road in Purchase, N.Y.  (Westchester)