On June 6, while American Pharoah made history winning the Triple Crown, another record was set in New York at the inaugural Global Family Reunion. Best-selling author A.J. Jacobs hosted the ambitious social project at the New York Hall of Science. For the one-of-a-kind festival, more than  3,700 distant cousins descended on the main party in Queens, with hundreds more participating at over 40 satellite parties around the world. The Global Family Reunion now holds several records on Recordsetter.com, including Biggest Worldwide Family Reunion (meaning most simultaneous interlinked family reunions around the globe) and Biggest Family Group Hug and others.  All proceeds benefited Alzheimer’s research and care. 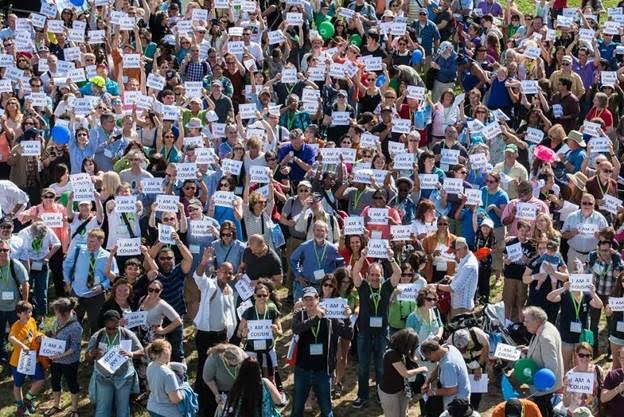 The festival featured more than 50 speakers and performers, including Henry Louis Gates Jr., Dr. Mehmet Oz, Morgan Spurlock, Marilu Henner, Jenna Ushkowitz, Andy Borowitz and Ted Allen talking about their roots, heritage, health, humor and food. Sister Sledge performed their famous anthem, “We Are Family” as the Jacobs’ extended family and dozens of his celebrity cousins joined on stage to sing along.

The event is part of a project by hundreds of researchers to help build a family tree of the entire world – a tree that now numbers a jaw-dropping 240 million people. For those who came to the reunion not knowing their connection to the Global Tree, the festival featured 20 genealogists on site who tried to link them up right there.

Jacobs’ interest in genealogy began two years ago when he got a letter from a man in Israel claiming to be his 12th cousin. Jacobs assumed the man was looking for money.  “I thought he was going to ask me to wire $10,000 to a bank in Nigeria,” Jacobs said.  “But I realized that he is part of a large community of people who are building these massive mega-trees, forests really.”

Research shows that humans share 99.9 % of our DNA and with the increase of genealogy sites we are able to see how just how connected we are. The goal of the reunion is to remind people we are all part of the same family, and that perhaps we should treat each other with a bit more kindness.

As Dr. Gates said during his keynote address: “We all know we are all descended from a common mitochondrial Eve and a common YDNA male ancestor. It’s one thing to read that and hear it in school. It’s another thing to see it demonstrated 50,00 years later through the assemblage of people who are actually cousins.”