How much is too much? Just about all dating disaster stories involve one too many cocktails.

Study: If you want to be more attractive on a date, drink a glass of wine 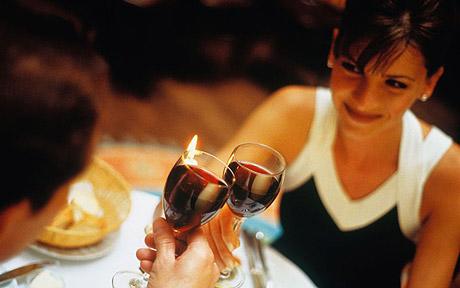 Will having a glass of wine put a rosy look in your eyes and a natural blush on your face?

No more, no less.

Want to seem more attractive to the opposite sex? Drink one – exactly one – very large glass of wine.

That’s what a recent study by a group of researchers at the University of Bristol’s School of Psychology, published in Science Daily, suggests.

The researchers asked 40 heterosexual men and women, divided equally between both genders, to complete an attractiveness-rating exercise. The volunteers were then shown two images of a person, one taken while the subject was sober, one after the subject had consumed 250 ml of wine (equivalent to a very large glass), and one after 500 ml of wine (two-thirds of a bottle) had been consumed.

Sandy Weiner, THE dating coach for women over 40 and founder of LastFirstDate.com says, “While a glass of wine can help with first date jitters, I recommend limiting your alcohol consumption to only one beverage on a first or second date. You want to calm your nerves, not obliterate your senses. And if your date is getting drunk, don’t be afraid to end the date early and graciously make your exit before he makes a move you might both regret.”

The researchers attributed this to the increased facial flushing that comes with consuming low amounts of alcohol, along with additional muscle relaxation and subtle smiles that portray a heightened positive mood.

One more good reason to drink in moderation.