Can you lose weight on “The Drunk Diet”?  Lady Gaga confesses she’s tried it: 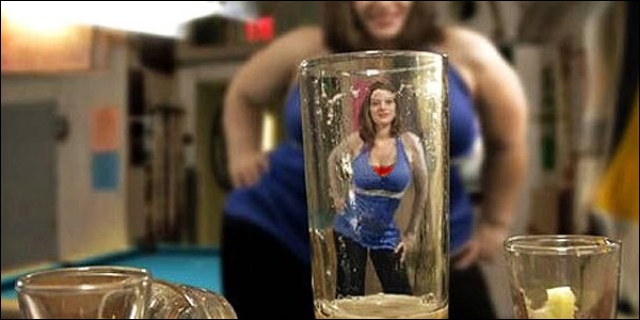 It’s no secret that college students sometimes drink too much, and it’s also not news that some college kids don’t eat a very healthy diet.

But a new phenomenon seems to combine these two common problems of undergraduate life into a bigger issue, and one that has its own name: “drunkorexia.” There’s little scientific research on drunkorexia, but some say they see it happening among college students.

“Drunkorexia basically means somebody is using inappropriate eating disorder behavior, such as restricting or binge eating, in order to compensate for binge drinking later on,” Dana Peters, a program therapist at a recovery treatment center Eating Disorder Center of San Diego, said on KPBS Midday Edition on Wednesday.

According to the National Institute on Alcohol Abuse and Alcoholism, 40.1 percent of college students ages 18 to 22 engaged in binge drinking in 2012. About one in four students report academic consequences from drinking.

“We do treat a lot of college-age students,” Peters said. “It’s definitely something that’s a part of being in college these days. It’s this glorify behavior to go and drink until ‘my goal is to blackout.'”

But opting to skip a certain food item, like dessert, for a cocktail isn’t the worst idea, said Mark Kern, a professor at San Diego State University’s School of Exercise and Nutritional Services.

“That’s probably a smart strategy because social drinking, not drinking excessively, is linked to obesity,” Kern said. “Obesity is linked to other chronic diseases like diabetes.”

Peters said drunkorexia can also be tied to the fear of the “freshman 15,” a reference to some students gaining weight when they enter college.

“I think that’s a very common fear,” Peters said. “Drinking is a natural part of being in college, despite them being underage, so you have to pick and choose. They would rather drink than the other.”