Art is often said to be subjective, but if there’s any subject that has the ability to leave you speechless, it’s definitely Christian paintings. Christian paintings have been around since the advent of Christianity itself, some reaching back as far as two millennia ago.

With the Bible being so intricately linked to a Christian’s beliefs, it should come as no surprise that religious paintings are among the most popular and widely viewed in the art world today.

Christian art has a unique way of portraying religious figures and scenes, inspiring wonder and awe in those who view them. It’s rare to find artwork today that’s both aesthetically pleasing and technically brilliant, but the artwork of the old masters still stands as the pinnacle of artistic achievement.

In this article, we take a look at some of the best Christian paintings in history, noting their technical brilliance as well as their excellent portrayal of religious symbolism.

The Creation of Adam by Michelangelo Buonarroti

Michaelangelo’s The Creation of Adam is a fresco painted on one of four walls of one of a series of chapels inside The Sistine Chapel, named after Pope Sixtus IV. This famous painting created in 1508 depicts not only God creating man in his own image but also God creating all mankind with every nation, race, and ethnicity along with every woman and man who has ever lived.

​​The painting depicts God as an old man, while Adam—the younger creation in the Biblical story—is completely naked. The work portrays a scene from Genesis wherein God asks for Adam to give life to Eve. There are many unique aspects about this work that make it so remarkable including its use of perspective, context clues, and color composition among others.

Anatomists, among many others, have studied the painting, and it’s been found that the shapes that appear behind God are accurate anatomy of the human brain; the cloth draped across him is shaped like a uterus, and the scarf at his neck is thought to be a recently cut umbilical cord.

Michelangelo created his painting in 1510-1511 CE, and despite being over 500 years old, its themes still resonate with viewers today. 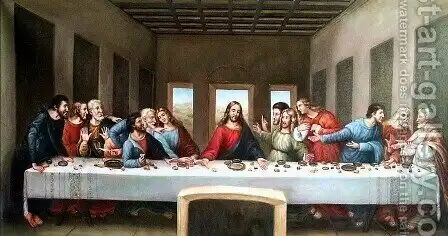 The Last Supper is one of the famous Christian paintings by Leonardo da Vinci depicting Jesus as presiding over an institution of men sitting at a long table to celebrate their last meal before his crucifixion. Leonardo brilliantly portrays the fear and concern of Jesus’ disciples when he announces that one of them will betray him.

The painting is a very complex composition, abounding in figures and details; it realistically describes the personalities of each figure represented, particularly through their gestures and expressions. A masterwork of beauty and tragedy, Leonardo da Vinci’s The Last Supper is the pinnacle of Christian Renaissance art.

He painted the masterpiece using tempera paint on dry plaster. This made what was already a mammoth task even more challenging as it meant there would be cracking and flaking as time passed by. The richness of detail captured by Leonardo da Vinci in The Last Supper has dazzled viewers for centuries and will continue to be an artistic marvel for future generations. 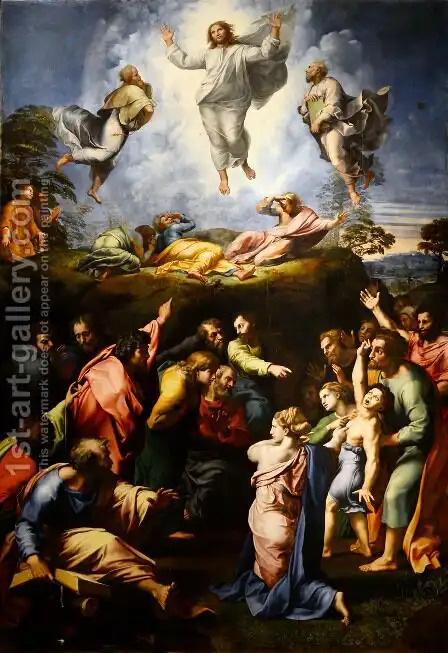 The Transfiguration can be considered as a “re-enactment” of Christ’s journey, as well as a celebration of his spiritual and physical power. The upper part of the painting shows Jesus being transfigured in white, next to prophets Elijah and Moses. Showing Christ miraculously levitating, illuminated by an ethereal light that shines from his transfigured face.

In the lower part of the painting, Raphael’s masterful brushwork conveys the horror and panic of a group trying to restrain a young boy in the grips of demonic possession. The scene is suffused with nervous energy, balancing uplifting spiritual themes with the gruesome subject matter.

The painting is noted for its majesty and beauty. The figures are all adorned with classical features which makes them seem surreal. When viewing it, people feel attracted to its brilliant use of colors, classicism, and dynamism because all these features play a major role in how successful artworks are perceived by viewers. No wonder, it is now called the pinnacle of art for its time and one of the most influential paintings in Western Art.

The Calling of St. Matthew by Caravaggio 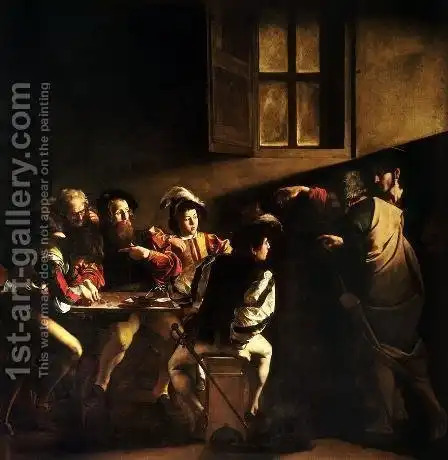 Caravaggio’s most famous work: The Calling of St Matthew has all the hallmarks of his genius, with a dramatic flash of light and darkness in the hand of God. A masterpiece of European art history, it draws you into the painting and leaves your eyes roaming around its crowded scenes.

This painting depicts Matthew, portrayed by an angel, leaving his old life behind to join Christ’s disciple. One of the 12 apostles, Matthew was initially a tax collector before he became one of the most famous evangelists. This painting portrays the exact moment when Jesus inspires Matthew to follow him.

It is one of the most famous works by the artist and it is thought to have been a catalyzing force for the style of painting that became known as Baroque. This style was marked by emotional expression and spectacle, which often included great motion, dramatic lighting, and tension-filled subject matter.

The Return of the Prodigal Son by Rembrandt Van Rijn 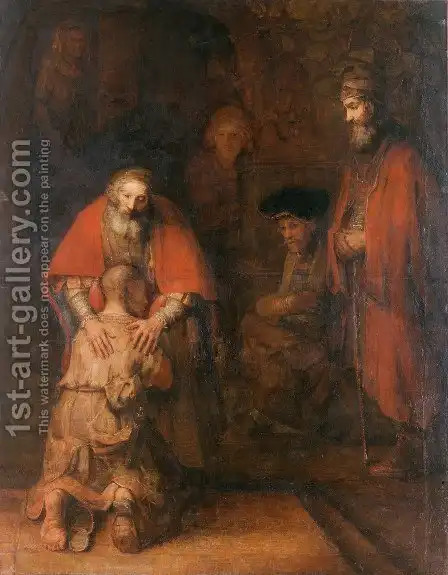 One of Christianity’s most famous stories, The Prodigal Son by Rembrandt van Rijn is a depiction of love and mercy. The son had forsaken his father but with a simple handshake, he was taken back into their fold. His father loved him no matter what he did wrong and even gave him a lavish party upon return. A beautiful story of forgiveness that stays strong till today.

The painting features dramatic lighting and coloring that beautifully illustrate the story’s message. Painted at the end of his career, the artwork demonstrates Rembrandt’s command over the interplay of light and shadow. He masterfully evokes in us the conflicts and emotions felt in this classic tale. Even today it’s an inspiration to people from all walks of life who are seeking a way out of their dead-end lives.

Depicting a reunion between a father and son- one who had squandered his inheritance on wild living- Rembrandt wants to remind us all how much God loves us. No matter how far away we run from Him, he always welcomes us back with open arms.

Religious art inspires many different emotions in people from all over the world. Most of it is either religious-themed or heavily based on biblical subjects. Even if you are not religious, there is no denying that these paintings have left their mark on history. Just to look at them fills one with wonder and amazement at their masterful quality. You can browse through many more Christain paintings at the 1st Art Gallery.