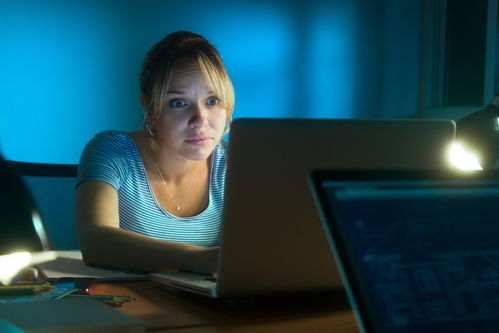 As the days grow shorter, millions of Americans are already battling the winter blues. Add in a little Facebook envy and you have a recipe for depression.

Therapists have  seen a rise in patients with social media depression from spending too much time online following other people’s lives.
Facebook is ruining all of our lives.
Okay, so that’s not completely true, but a new study from the cheerily-named Happiness Research Institute suggests that staying off Facebook can actually make you happier.
Not that this isn’t something we haven’t already heard before. Many times. But, hey, let’s reinforce it, shall we?
This study surveyed 1,095 people in Denmark — so, for what it’s worth, maybe Facebook is just ruining the lives of Danish people. The sample group, comprised of individuals who were an average age of 33, was divided into two halves: One carried on with their Facebook use as usual, while the other stopped using the social media site entirely, per Phys.org.
A week later, 88 percent of those not on Facebook said they were happy, compared to the 81 percent still on Facebook. Also, 84 percent of the nonusers said they appreciated their lives, while only 75 percent of the Facebook users felt that way.
Based on those numbers alone, we’re not really sold on Facebook being so bad. But then, there’s this: A mere 12 percent of the people who didn’t use Facebook said they described themselves as “dissatisfied,” whereas 20 percent of the Facebook users indicated they felt that way. The Facebook users were also 55 percent more likely to feel stressed, says Quartz.
Read more
Are you suffering from Facebook Envy?