The cigar has long been the accessory of the world’s most famous. They are rolled bundles of dried, fermented, and fastened tobacco leaves that have a unique and tasty flavor. Cigar tobacco is grown all around the world and can be found from Italy to Honduras. The origin of the cigar is shrouded in mystery and nobody can pinpoint the time when it was first created, however, there exists a Mayan pot from Guatemala, carbon-dated back to the 10th century, on which there is art that depicts people smoking what is now thought to be cigars. It is important to mention here, that as with any form of tobacco, cigar-smoking comes with serious risks to your health. Every year, millions die from cancer, a large chunk of those being from lung tumors. Smoking is a habit that can ruin your life and the lives of your family and friends, so if you are going to smoke, smoke in moderation and smoke sensibly.

Here are six facts that will change everything you know about cigars.

If in the past you have previously struggled to find a list of interesting facts about cigars, then look no further than here. This website will hope to tell you six of those interesting facts, so keep on reading! Cigars can, in fact, be bought wholesale. Many people are under the belief that you have to buy them individually, or that there are restrictions on cigars. This belief is wrong, and rather, people confuse the restriction on Cuban cigar importation to the United States with all cigars. Cuban cigars are limited when exporting out of Cuba, whereas ordinary cigars are not and can be bought wholesale or in bulk from any country in the world (other than Cuba, of course).

Christopher Columbus, the so-called founder of the United States, introduced cigars to Europe. After an expedition to Cuba in which he was searching for treasure (to no avail), Columbus was introduced to the burning and smoking of leaves that they named Cohiba, which is today known as tobacco. After this expedition, he returned to Europe and introduced the practice to the rest of the western world. With the fact in the introduction referencing the Mayan vase, it is amazing that the practice was as far spread as Cuba and yet we still know very little about the origins of cigar smoking.

Cigars have long been associated with Fidel Castro and his revolutionary comrade Che Guevara. Che and Fidel were proponents of the cigar and could seldom be seen without one between their fingers. Throughout the 1960s, the CIA was targeting Castro and attempting to assassinate him. It was during the 1960s, taking into account Fidel’s love for cigars, that the CIA decided to use a poisoned cigar to take him out. According to Castro, the cigars failed to poison him but left him feeling nauseous, and he is reported to have said that they tasted of leather and gorgonzola.

When Winston Churchill took his first high-altitude overseas flight, he ordered for the creation of an oxygen mask that would facilitate his smoking. After having the mask commissioned, it was said that Churchill would frequently bring it on overseas high-altitude plane flights. Churchill was another figure long associated with the cigar, and some of the most famous images of him contain him holding one between his fingers. Churchill was the prime minister that led Britain to victory during the Second World War for those who do not know who he is.

The term close but no cigar is one we have all heard, but very few of us actually know the origins behind it. Cigars were, amazingly, a fairground prize for adults and children at one time. The term originates from this and would often be said by those managing the fairground when people would come close to winning the cigar. The practice was stopped when the harm smoking can have on people become apparent, as many of the people who won cigars were children. 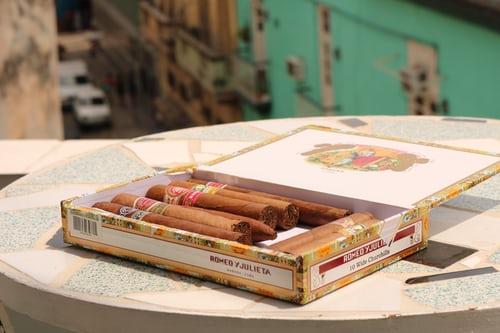 According to statistics put forward by many anti-smoking agencies, shockingly, the age demographic that smokes the most cigars is between 16 to 21. The reason for this, apparently, is that youth often attribute cigars to movie stars and public figures, and therefore, want to emulate them. This is very damaging, as young people who smoke are statistically more likely to develop tumours, owing largely to their lungs being underdeveloped.

Now you know six facts about cigars that may change the way that you think about them. Cigars are nice when smoked moderately. If you find yourself becoming addicted, seek help.