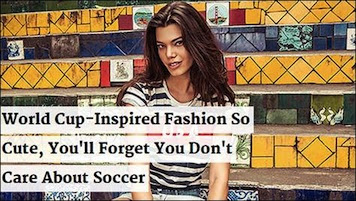 World Cup mania is sweeping the globe, and not just on the pitches and play fields, but now also on the runways and walkways. The adidas World Cup Pure Boost special edition now have the fashion magazines talking soccer, as Cosmopolitan and Harper’s Bazaar have recently run stories featuring these swanky fast kicks. Let your readers know, whether they are looking to lighten up their distance running game with a little World Cup spirit, or want to bring the global soccer madness into their fashion line-up, the adidas World Cup Pure Boost special edition for men and women have it covered.

For the last several days, the world has been watching the adidas Battle Pack Soccer Collection light up the World Cup pitch on the feet of the players. Now, you can take their soccer style to the street with a World Cup Pure Boost special edition.

Inspired by the iconic beach promenade of Rio’s Copacabana, and the war paint of native warriors, these special edition Pure Boost shoes have recently been featured in Cosmopolitan and Harper’s Bazaar as the reason “fashion girls have to embrace the game”. Grab a pair and become a part of the only conversation, either in sports or fashion, that the world is having right now.