What is a Hiram Halle House? 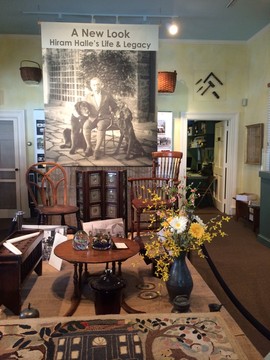 Hiram Halle was born in Cleveland, Ohio in 1867. He left school at 14. He became an inventor for Universal Oil Products. Their breakthrough product was a 100 percent octane aviation fuel, which gave the Allies superior air power over Germany and Japan in WWII.

When the company was sold in 1931, his life as a Philanthropist began. In 1933, New York’s “New School” saw the gathering storm in Europe and started a program called “Scholars in Exile” to bring German Jewish Scholars to the US. Halle pledged money to fund the first two years.

A great admirer and supporter of Albert Einstein, some of their correspondence is a highlight of the exhibit. In Pound Ridge he helped build the Elementary School, started the Fire Department, renovated a house in the Hamlet and had his friend, Emily Shaw, run the inn.

Long before destination anything was fashionable, “Emily Shaw’s” was destination dining for years – it is now “Jean-Georges The Inn at Pound Ridge”.

He acquired several houses in Pound Ridge which he renovated not in the Colonial or Victorian style in which they were built but in an idealized Classical style. He travelled through New England for his building materials. Delicate and beautiful Palladian Styled windows, wide floor boards, antique mantels, hand blown glass windows and many both fine and rustic components grace these homes.

He rented them filled with Americana Antiques he found in his travels. We lost Hiram Halle in 1944. The exhibit is sponsored by Houlihan Lawrence Real Estate a strong supporter of our local communities.

More info about the Pound Ridge Historical Society Museum can be found at www.PoundRidgeHistorical.org.