Under crimson clouds and indigo night skies, hazy peaks roll along the horizon for miles all around. Sweet mountain air wafts through serene foliage, and black bears and wild turkey flank trickling freshwater creeks in the lazy afternoon sun. The Great Smoky Mountains of Eastern Tennessee are truly a quiet respite from the bustling, sleepless world.

Yet, no one would suspect such a natural sanctuary to host a world-class spread of artistic talent, showmanship, and culinary excellence, too. Sitting at the feet of the impressive Smokies, the charming small town of Pigeon Forge boasts some of the finest dinner theater experiences in the South.

Dinner theater is a timeless format, combining theatrical performance, music, storytelling, special effects, and delicious local cuisine into a single unforgettable evening that the whole family will appreciate. Of all the unique offerings of Pigeon Forge entertainment, these dinner theaters should be a quintessential activity for any Smoky Mountain getaway.

Pirates Voyage Dinner & Show is known as one of the most fun places to eat in Pigeon Forge. Be prepared to be treated like a pirate lord as soon as you sit down for the four-course feast. Dig into savory vegetable soup, pan-fried chicken and sugar-cured ham, corn on the cob, herb-based potato, and decadent peach turnover while the action-packed show sweeps you out to sea.

Led by swashbuckling Captain Blackbeard and dashing Quartermaster Calico Jack, the crews of the Crimson and Sapphire take on the vast dangers of the high seas. The brave heroes meet beautiful mermaids, exotic birds, and quirky sea lions, but not everything they encounter is so friendly. Aboard two life-sized pirate ships set in the indoor lagoon, the crews must ultimately fight a grand battle of high-flying acrobatics and impressive stunt work to find a long-lost treasure.

The farcical antics of the Hatfield and McCoy cousins will have you rolling in your seat in laughter. These two country families have been feuding for generations, and neither has a mind to stop anytime soon! Staged at a massive indoor swimming hole, their ridiculous fight has them compete in mountain clogging, singing, amazing stunts, and absurd bouts of comedy. 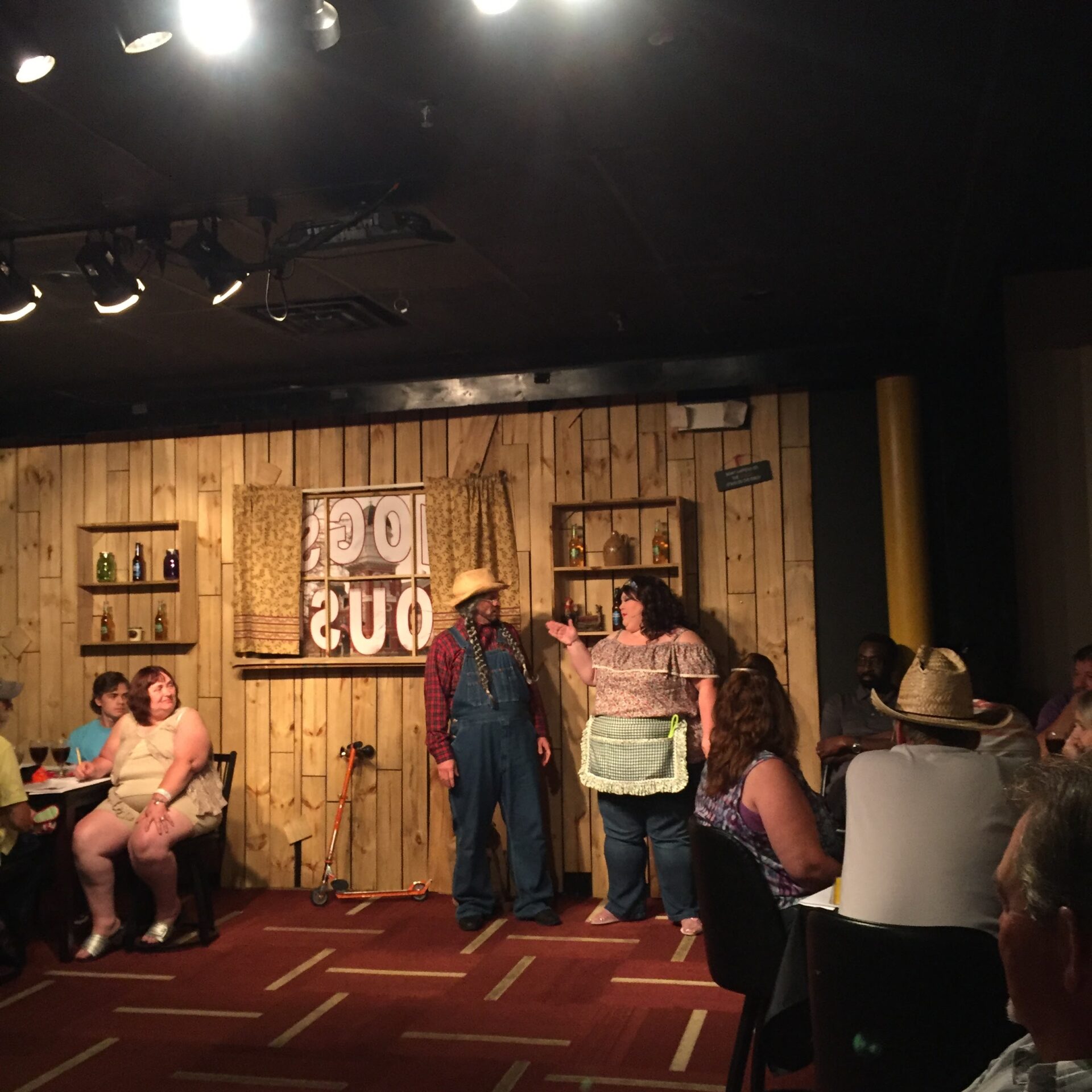 At Murder Mystery Dinner Show, the action takes place right up-close in the small, intimate theater so that audience members can participate in the intrigue of their three interactive shows. Moonshine Murders is about a family slinging moonshine before meeting their unfortunate fate and potential jail time. Who Shot the Sheriff is a Wild West comedy where Sheriff Dillon must protect Dodge City and Miss Kitty’s saloon against gunslingers. In Marriage Can Be Murder, Michael and Lisa’s wedding plummets in a downward spiral, starting with bickering in-laws and ending in dead bodies.

As you calculate the facts, dine on your choice of soup, country-fried chicken with white pepper gravy, pulled pork, mashed taters, green beans, a homemade dinner roll, and decadent dessert. Vegetarian, vegan, gluten-free and dairy-free options are available upon request. Even though it may be family dinner time, make sure to keep your cards close to your chest. You’re competing with your fellow audience members to win the prize package for the Top Sleuth of the night! 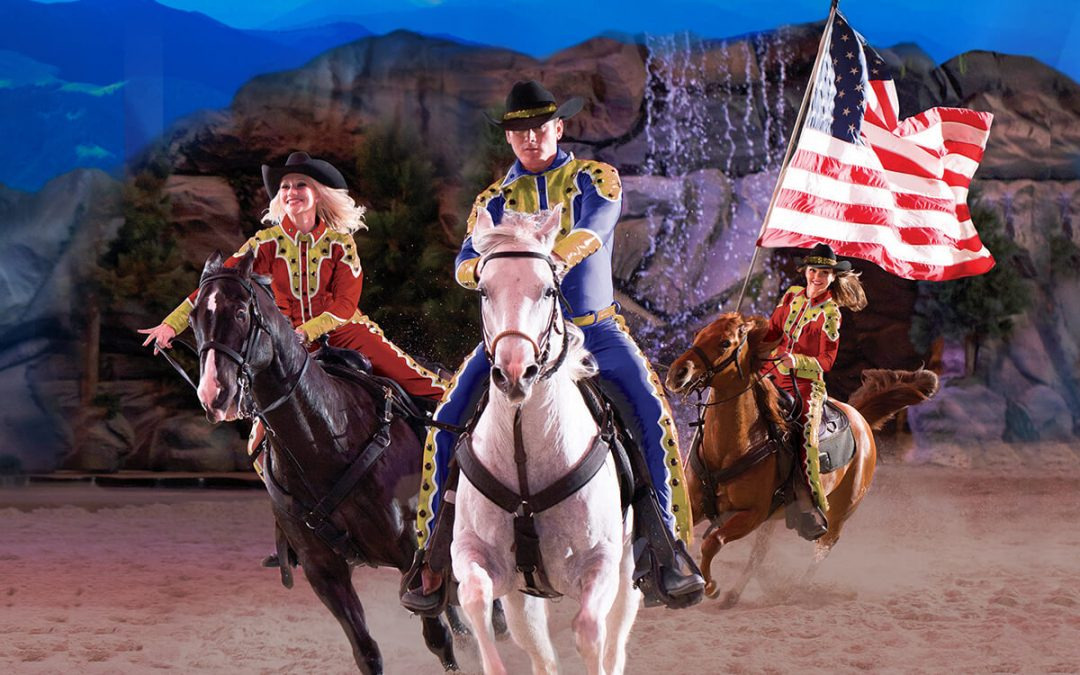 Dolly Parton’s Stampede is a spirited extravaganza of real-life horses, special effects, jaw-dropping stunts, and touching music that you won’t want to miss. Amid spectacular colored lights and original music from legendary Dolly Parton herself, thirty-two well-trained horses strut in formation and compete in trick riding. The action-packed evening includes a family-friendly four-course feast of original veggie soup, hot biscuits, whole rotisserie chicken, hickory-smoked barbecue pork loin, corn on the cob, herbed potato, and hot apple turnover. Before you sit down for this Southern-inspired glory, make sure to get to the venue early enough to meet the stars of the show. A stroll along the Horse Walk allows audience members to meet the gorgeous steeds up-close and in person. 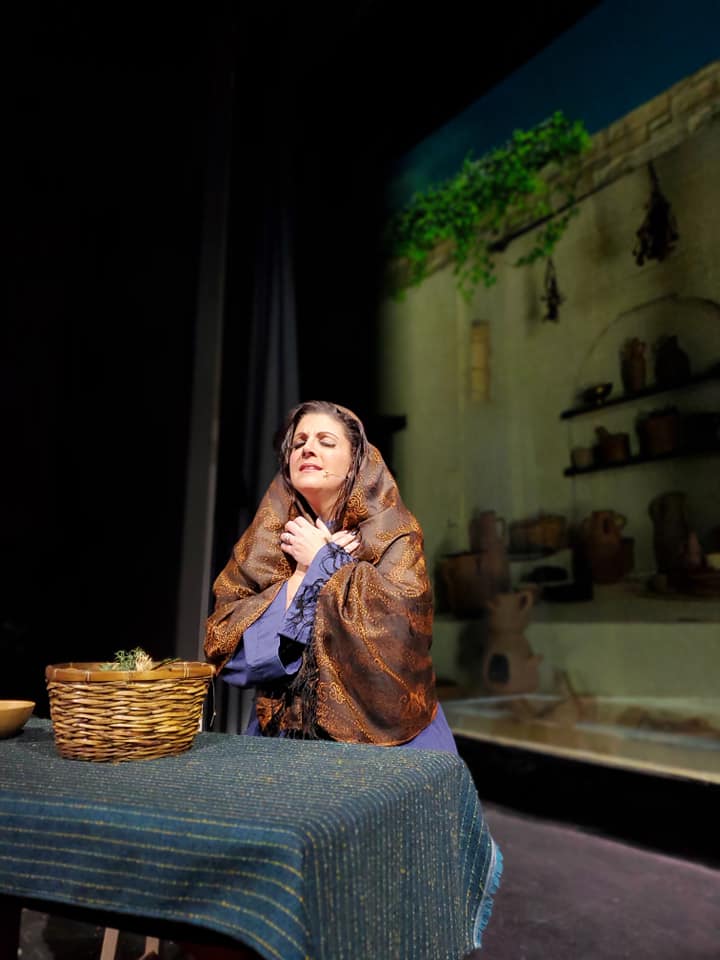 Biblical Times Theater combines gospel-style music, theatrical performance, and state-of-the-art holographic and 3D technology in their mainstage show, “Ruth.” Follow Ruth and Naomi on a trying spiritual journey from the loss of their families to the holy town of Bethlehem, ultimately to God’s love and redemption. As you settle in for an evening of uplifting drama and experience a deepening of faith, your delicious dinner is quickly served! You’ll savor every bite of the seasoned pork loin with maple glaze and smoked chicken breast. Plus, the garlic mashed potatoes, country green beans, mac ‘n’ cheese, and strawberry shortcake will send your taste buds straight to heaven. Biblical Times Theater also hosts a Christian music concert series all year round, featuring artists like the LeFevre Quartet, the Down East Boys, The Nelons, and Brian Free & Assurance.

It’s no secret that the Great Smoky Mountains have much to offer in terms of natural wonder. However, the perhaps lesser-known truth of this scenic region is its rich appreciation of the theatrical arts. Pigeon Forge, in particular, is a hub of dinner theater shows appropriate for all ages. Get swept away on the swashbuckling adventures of the seven seas, or to the frontlines of absurd country feuds, or into the noir world of crime and mystery — all while dining like a king on classic Southern culinary favorites. With so many exhilarating and hilarious stories to experience, the dinner shows of Pigeon Forge offer just as much escape from the real world as the peaceful mountains themselves.