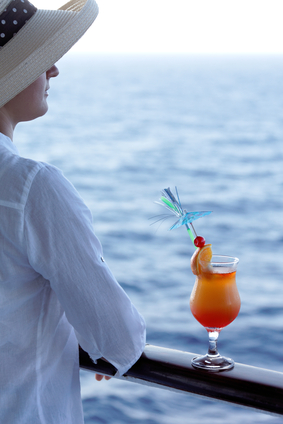 You’ve made your cruising checklist and checked it twice; there’s no way you’re going to forget your sunscreen, your camera or that juicy novel you’ve been dying to read. But there’s one thing you may be forgetting: to protect your identity while you’re frolicking on the high seas. Just because you’re on vacation doesn’t mean that identity thieves are taking a break, too. An estimated 16.6 million people (or 7 percent of the population) were victims of identity theft in 2012 alone, the U.S. Bureau of Justice Statistics reports. Victims lost an average of $9,650, according to Daily Finance, an amount that underscores the need to protect yourself. Follow these tips to keep your identity safe while you’re cruising, so you can relax and enjoy yourself:

Take steps to secure your identity before you board the ship. Make two copies of important documents, like passports and credit cards, so you’ll have access to them if the real ones get stolen. Leave one set of copies in your home safe.

Protect your car, too. If you’re parking it in a facility while you cruise, remove all identifying documents, including title, insurance and registration.

Before you leave, notify your credit card companies and bank of the ports you’ll be visiting and which days you’ll be there. Consider signing up for an identity theft protection service that alerts you if anyone tries to access your accounts.

While You’re on Board

In your cabin, store your passport, credit cards and copies of your documents in the safe. When you’re docked at port, don’t connect to Wi-Fi networks labeled “unsecure” or “ad-hoc.” Identity thieves have been known to set up networks just to capture users’ information, according to Cruise Critic. For that matter, limit the amount of personal data you store on your laptop, whether at home or at sea—using it on a public network leaves you vulnerable to hackers.

While part of the fun of a cruise is meeting new people, don’t be too quick to share personal information. Thieves can use seemingly innocuous data (your employer, your kids’ school) to commit identity theft. Be cautious and don’t over-share.

Speaking of over-sharing: Keep the social media posts to a minimum when you’re cruising. As tempting as it is to post pics of the striking sunsets, it also sends potential thieves a hint that you might be too busy to monitor your accounts.

Leave your passport in the safe while you’re exploring and simply take the copy with you. Leave your cell phone in the safe too; according to Cruise Critic, mobile phones are the most-stolen item in port.

Use cash or traveler’s checks to make purchases. Most places accept American dollars, and you’ll avoid the possibility of an unscrupulous cashier swiping your account information from your credit card.

Follow these simple tips and you’ll have greater peace of mind. Instead of worrying about identity theft, you can worry about which fruity cocktail to order next.