In an ambitious first-time solo exhibition at a New York museum, multimedia artist Chris Larson will create a site-specific commission for the Katonah Museum of Art. Larson is a film-maker and artist whose practice encompasses large-scale installation, sculpture, photography, and performance. This focused exhibition showcases the versatility and vision of this recent Whitney biennialist whose work explores themes of creation, destruction, and the transformation of space over time. Chris Larson: The Katonah Relocation Project is on view March 29-June 28, 2015. 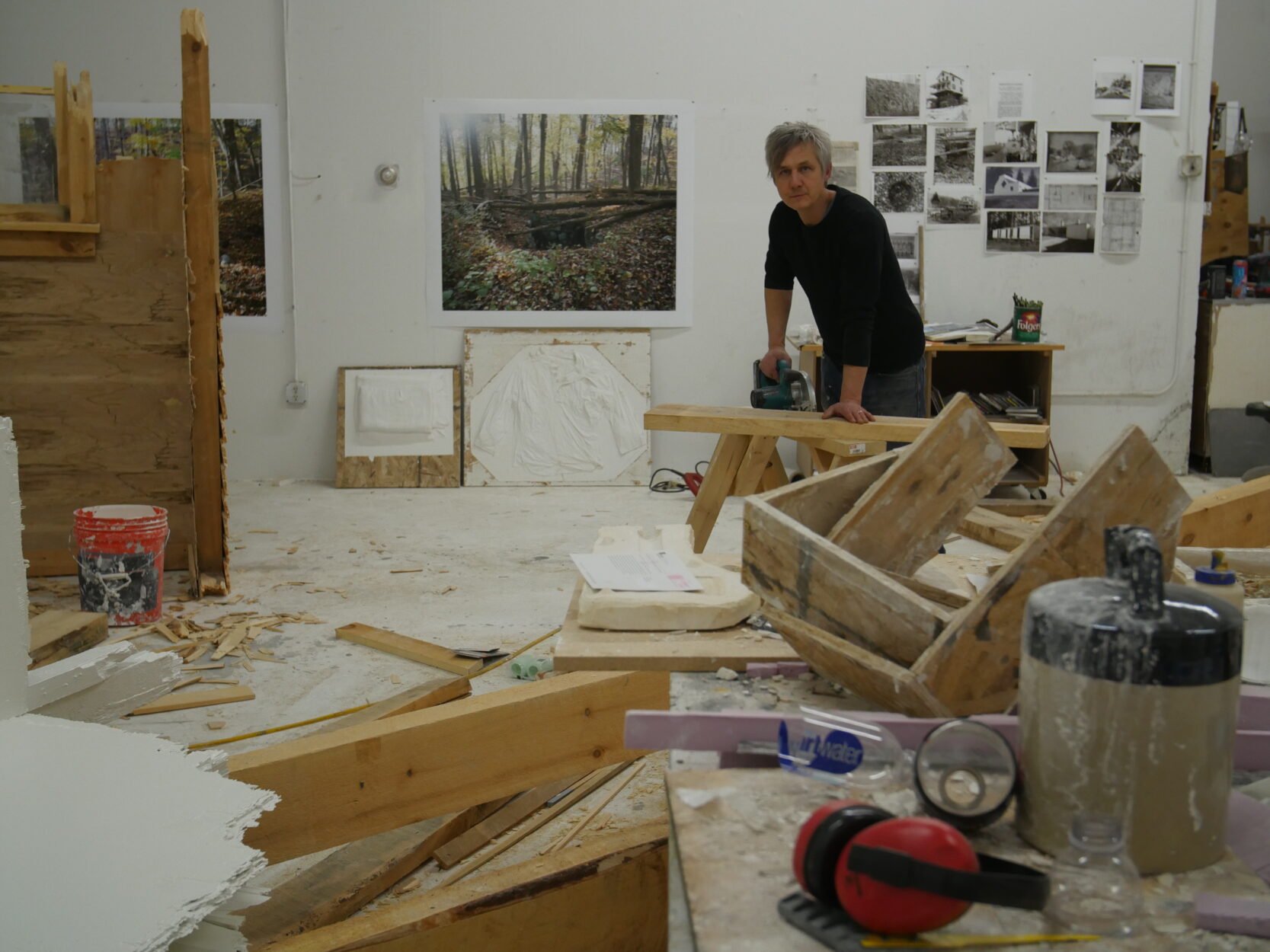 Photograph of Chris Larson in his studio by Jordan Rosenow, 2015

Larson will take over the gallery and sculpture garden in a full-scale installation that draws its inspiration from the relocation of Katonah. In 1897, the town was moved to create the Cross River Reservoir, a much-needed source of drinking water for the ever-growing metropolis of New York City. Rather than lose the idyllic hamlet to the impending flood, townspeople banded together to transport their homes and belongings a short distance away, using horse-drawn sleds. Taking this story as a point of departure, Larson explores themes of home and relocation, examining both the strange history of this event and the materials that it encompassed – the timber logs used for transport, the grease used to ease mobility and, of course, the water that would eventually cover parts of the town. 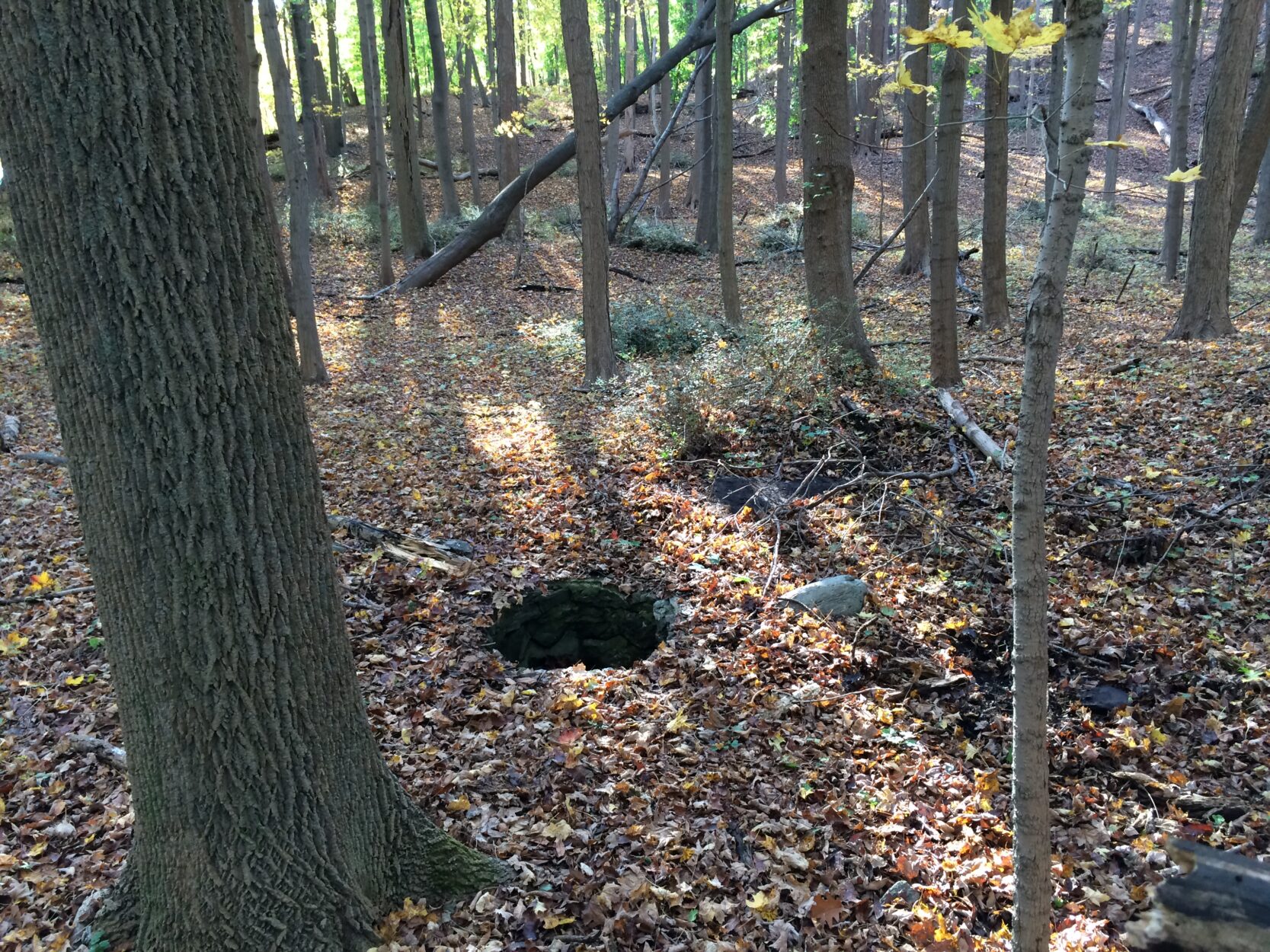 Concurrent with the gallery installation, Larson will create a new work outside, which will be on view all summer. This large piece is modeled after the personal residence of Edward Larrabee Barnes, the great American museum architect who designed the Katonah Museum of Art and lived in nearby Mount Kisco. Set amidst an intimate garden on the backside of the Museum, the artist’s structure is both a symbol of modernist purity and a testament to the capacity of nature to intervene; large spruce trees puncture the floors and roof, and the building itself will be allowed to alter with the elements during its six-month installation. In addition to his sensitivity to the unique conditions of every environment, Larson has a track record of working with themes of domestic architecture. In a recent summer event, he fabricated a replica of a home by Marcel Breuer and set it aflame in front of an audience of onlookers and journalists (see “Burning Down the House” by Michael Tororello, The New York Times, June 9, 2013).

Chris Larson was born and raised in St. Paul, Minnesota. He received a BFA from Bethel College in 1990 and an MFA from Yale University in 1992. In addition to exhibiting throughout the United States, Larson has participated in group exhibitions in Brazil, Canada, China, France, Mexico, Peru, and Uruguay, and he has had solo exhibitions in Switzerland and Germany. His work was recently featured in the Whitney Biennial (2013). Larson has also received fellowships from the Louis Comfort Tiffany Foundation, the Minnesota State Arts Board, and the McKnight, Jerome, and Bush foundations. He is currently on the faculty of the Department of Art, University of Minnesota in Minneapolis.

ABOUT THE MUSEUM
The Katonah Museum of Art, committed to presenting exceptional art from all cultures and time periods, through innovative exhibition and education programs, promotes the understanding and enjoyment of the visual arts for diverse audiences. The founders’ decision to be a non-collecting institution resulted in a dynamic and flexible exhibition program, which remains one of the most distinctive features of the KMA. The KMA offers lectures, films, workshops, concerts, and other events for a general audience; and presents innovative and substantive programs for over 100 member schools. Our Learning Center is the only interactive space in Westchester County where children can come on a daily basis to explore and create art.
*Museum hours: Sunday: 12pm – 5pm, Tuesday through Saturday: 10am – 5pm, Closed Monday.