Last year, Super Bowl Sunday was the biggest pizza day of the year. It was also the biggest day for downing tortilla chips and wings.

The experts at MyFitnessPal are sharing their super snack Sunday stats leading up to game day.

One fact: consider pizza and beer the adult version of peanut butter and jelly.  According to MyFitnessPal, the consumption of pizza and beer over the course of 2014 was correlated at .85 — that’s super high! In addition, men drank 144% — almost 2.5x — as much beer as women. But there’s a caveat: women drank 25% more wine than men.

Pizza and beer go together like peanut butter and jelly.

Who’s eating (and drinking) what? 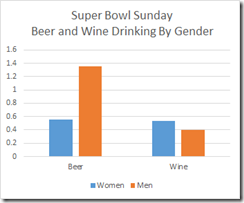