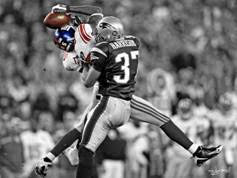 The biggest stage to watch the biggest game of the year is Empire City Casino with New York Giants Legend David Tyree, courtesy of JAG Sports Marketing. Tyree will be stopping by the premier entertainment destination in the Northeast to host a viewing party on Sunday when the Atlanta Falcons take on the New England Patriots for all the marbles.

The free festivities begin in the casino’s Entertainment Lounge at 5:30 PMon game day, where Tyree will mingle with fans, sign mini footballs which will be offered to the first 100 guests, and watch the game with fans until 6:30 PM.  Empire City Casino is bringing in a 10 foot by 15 foot jumbo screen to bring football fans as close to the action as possible with seating on a first-come, first-serve basis along with $5 beers and hot dogs.

Most fans know Tyree for his miraculous helmet grab on a third down and long on the final drive of the 2008 Big Game that helped propel the Giants to their first championship win in 17 years and ruined New England’s bid for a perfect season.  During the viewing party, Tyree will also provide some insight on what it was like playing the undefeated Patriots nine years ago.

Additional viewing and food options are available at Empire City with Dan Rooney’s Sports Pub offering a $35 buffet menu along with $5 bud and bud light drafts and over 40 high definition televisions. Seating is on a first-come, first-serve basis. Highlights of the buffet include football classics like wings, burgers, sliders and nachos and a special regional dish for each team.

As an added bonus, the first 5,000 Empire Club Members to check in at the main promotions booth will receive a free “Game Day Beanie Cap”.  Fans who are not Empire Club members can sign up for free in a matter of minutes.