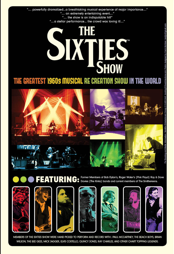 The Greatest 1960’s Musical Re-Creation Show in the World. The band features former members of Bob Dylan’s, Ray Charles, James Brown’s, Ray and Dave Davies {The Kinks} bands and current members of legendary multi-platinum pop superstars The Smithereens. The show is a cross-generational crowd pleaser and the band is widely celebrated and known for re-creating spot on, note for note recreations of the hits, B-sides and deep album cuts from the greatest songs of the 1960’s. Take a trip back to another time and place that was the 1960’s, where an AM radio is blasting out the latest sounds from a convertible, on a warm summer starlit Saturdaynight on any street USA!

All of the music is performed live, with no samples, backing tracks or pre-recorded music of any kind. The band uses a state of the art sound system but, only plays authentic 1960’s period vintage and re issue vintage gear and instrumentation just like original artist’s and original recordings. This combined with genuine 1960’s mod costumes that the band wears only adds to the meticulous detail and authenticity of this popular and powerful theater show.