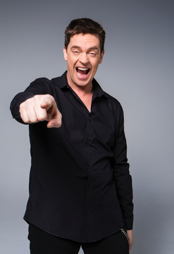 With over 20 years of stand-up comedy experience, Jim Breuer remains one of today’s top touring comedians, known for his charismatic stage antics, dead-on impressions, and family-friendly stand-up. After making his big break in 1995 when he joined the cast of NBC’s legendary “Saturday Night Live,” Breuer quickly became a fan-favorite for his original character “Goat Boy: and his dead-on impressions of actor Joe Pesci. Following his success on SNL, Breuer starred alongside Dave Chappelle in the cult favorite film “Half Baked.”

Kicking off the night is Bryan McKenna. Bryan has been featured in the LaughYourAshvilleOFF Comedy Festival (2015) and a quarter finalist in the Carolines on Broadway March Madness Contest (2015) and tours nationally with Jim Breuer. You might also recognize him from the Martin Scorsese film “The Wolf of Wallstreet” if you recognize the top left corner of his left ear.​