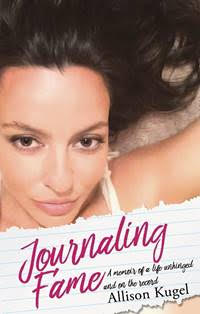 The reason behind 50 Cent’s hardcore lyrics about women & what he thinks of Jay Z, Eminem and Kanye West

How Elle Macpherson stays sexy at 50

Why Russell Simmons is the ultimate feminist

Author Allison Kugel spent a decade conducting in-depth sit-down interviews with hundreds of celebrities, politicians and newsmakers. In her memoir, Journaling Fame: A memoir of a life unhinged and on the record, she spills the stories behind the stories – secrets celebrities confided in her, who was difficult and who was down to earth, celebs’ personal struggles and more.

In her revealing tome, Kugel also weaves in and out through her own struggles with extreme bouts of anxiety, panic attacks and OCD as she relates it to many of the celebrities who opened up to her about their own struggles. In addition to fun and revealing celebrity content, Allison shares an intimate glimpse inside the mind of someone living with an anxiety disorder; something 40 million Americans can relate to!

Journaling Fame is an irresistible thrill ride of pop culture antics and tumultuous mayhem, that manages to deliver a spiritual message.

Allison Kugel has been interviewed and covered by Page Six of the New York Post, NEW! Magazine UK, News.com.au in Australia, Popwrapped.com, TVGrapevine.com, TheDirty, RadarOnline to name a few.

Allison will be appearing at Book Revue in Huntington, New York on Monday, July 24th at 7 PM to do a reading, discussion, Q&A and book signing.