Sometimes opposites attract each other and sometimes people of the same kind stick together. Why two people fall in love is often inexplicable, not only the feelings but because the body starts to go crazy. Nevertheless, there isn’t a single explicit love hormone, rather a combination of hormones along with chemical messengers responsible for the changes in the brain and body. 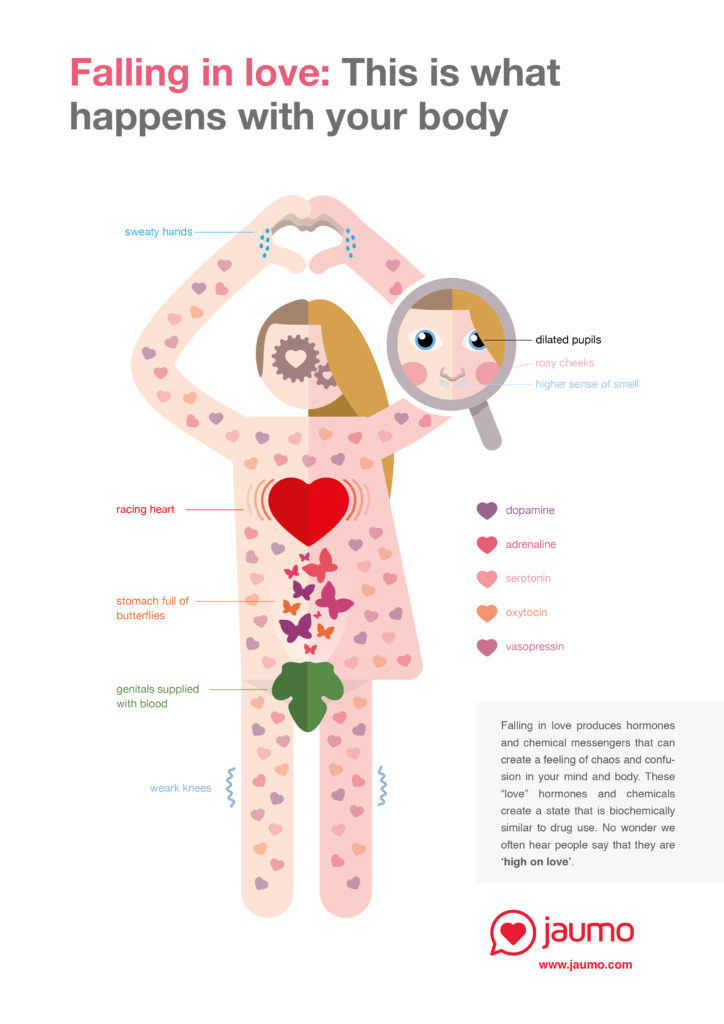 Falling in love: some are on cloud nine, others are finding themselves on a roller coaster of emotions and some are looking through rose-tinted glasses. The Greek philosopher Plato found the definition of love by describing it as a serious mental disease. In fact, the sentimental chaos is biochemically similar to a drug noise, and innumerable body-borne substances are involved. Being in love is, in any case, an emotional state of excitement and what exactly causes a person to trigger it is often a mystery. After all, there are biochemical explanations for the symptoms:

The greatest villain is the stimulating stress hormone adrenaline. It is produced in large quantities and causes some physical changes. First and foremost, adrenaline puts the body on heightened alert. When adrenaline is triggered, the oxygen consumption inside the body is increased and this results in a quick beating heart and sweaty hands. The pupils start to expand, and since the stomach is a very sensitive part of the body, all these sudden hormonal changes feel like tingling in the belly — otherwise known as “The Butterflies”. The brain can only concentrate on a few things at the same time, during stressful situations happening in the body, which is why we often feel absent from our own environment.

Also, the happiness hormones dopamine and serotonin are involved in the love-business. The dopamine level is significantly increased, which ensures a proper energy and euphoric thrust responsible for the transmission of emotions and feelings. Too much dopamine also causes a lack of appetite and insomnia. However, the body will soon become accustomed to the increased secretion of dopamine. This can lead to withdrawal symptoms when the level drops again – similar to taking drugs. The proportion of serotonin in the infancy phase of love is markedly small. Passionate infatuation and a notorious behavior are similar in this regard.

Oxytocin is used as a cuddling and bonding hormone not only for falling in love but also between mother and child at birth. These interactions are encouraged by Oxytocin helping to increase interpersonal bond. Also, vasopressin can be included in this category as it increases the pressure in the vessels, supplies the sex organs with blood and consequently increase sexual pleasure.

The olfactory sense is intelligent in this process. The brain can recognize genetic individuality through the sense of smell. If the partner’s immune system is compromised, this pairing strengthens their own defense, which actively increases the odds of chemistry between two people.